Since the first talked-about Made in India OTT content, Sacred Games, featured on Netflix in June 2018, there has been hue and cry about the kind of content that was peddled in the name of home entertainment. The feature was everything that the CBFC would have rejected after watching the first few minutes. 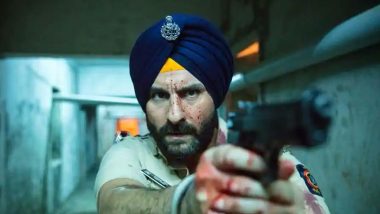 Since the first talked-about Made in India OTT content, Sacred Games, featured on Netflix in June 2018, there has been hue and cry about the kind of content that was peddled in the name of home entertainment. The feature was everything that the CBFC would have rejected after watching the first few minutes. Just about everybody who watched it found it gory, macabre replete with foul words, violence sans reason with an overdose of sex, unnatural at that. FIR Against Hotshot, ALTBalaji, Kukoo, Ullu and Other OTT Platforms Over Allegedly Transmitting ‘Obscene’ Content Online

Sacred Games had all that neither the Indian Censors Board would allow or was suited to be seen at home. It was not porn, it was worse. It was a script of convenience. A lay despo walks in, kills the reigning don of an area in Mumbai and becomes the new don! Is becoming a don so easy in Mumbai? If that was not all, he takes over the city! Fine, the writer's imagination should have stopped here. After all, he was, probably, just giving vent to his dreams -- that of becoming a different writer. More a show of deprivation. Laxmii: Akshay Kumar’s Horror-Comedy Breaks Record, Gets Biggest Ever Opening on Disney+Hotstar As Claimed by the OTT Platform!

I remember a time from the single screen era. There were some periods that were considered dull for the release of a new film. The exhibitors had to feed their cinemas with dubbed films from South or re-runs of successful old films to keep the business going. There were areas where the audience was majorly labour class in every city and town, and the exhibitors there preferred these South Indian dubbed films, especially from the Malayalam film industry, which was rather bolder with depiction of sex.

The posters and banners of such films promised sex scenes which were not even a part of the film. In the film, it was left to the imagination of this lower strata viewer that had landed up in the metro to work and feed a family back home. But, even this class, which toiled to earn a living, had some shame and, if they were drawn to such a film, it was only during the night shows which, in those days, commenced at 9pm. They could not be seen entering such a screening in broad daylight.

And here with OTT, we are talking about family viewers who are expected to watch programmes with family! Then, the arrival of OTT in India, on which neither the authorities nor the Indian Censor Board had so far no control, let content-givers vent their filthiest of creativity. More such content followed; even an Arya, which did not need to depict sex added it 'just to be safe'! Except two of the best and most successful OTT shows, Special Ops and Scam 1992 and a few others, just about every content maker for the OTT seems to be convinced that repulsive content sells! Maybe, to the OTT platforms it sells, not to the ultimate consumer, the viewer.

But, Sacred Games and other such programmes that followed, raised many eyebrows and, from the day of its launch on the OTT, a demand rose for a Censor Board-like check on OTT content. I am naming Censor Board just because it is a content controlling body, not because it has proved to be effective in any way!

Sex and violence were not the only ingredients that were bothersome. There were some programmes that took liberty while depicting the armed forces or religion. There was much controversy about Gunjan Saxena: The Kargil Girl which dealt with the subject of the India Air Force and the recent Laxmi Bomb which was later retitled just Laxmii. For them, it would be better to know that in India, when it comes to providing entertainment, the watch word is Identification. The viewer has to find the story familiar or, at least, plausible. One he can relate with. A lot of films, or almost all, dealing with stories about the Bahubalis (strongmen) of UP and Bihar have failed when released theatrically.

People don't take lightly anymore to religion or nationalism being compromised in anyway in the name of entertainment. However, some makers think making such a content raises controversy and generates a lot of free publicity and awareness, leading to creation of viewers. I have observed many times that the death of a star may boost a film's prospects, controversy never did. I suppose, what applied to films will also work the same way with OTT content.

A lot of good content in various languages followed and was much appreciated. But, for some reasons, there was a certain lot who probably thought it was trendy, or that they were living up to international standards, by depicting all that was repulsive. The difference between feature filmmakers and OTT content makers is that, while filmmakers are usually pedigreed, the other kind is, in most cases, Fly by Night kind or, the small-time filmmakers.

The idea is to make money and, since the OTT platforms need to create content suitable for India, these makers are cashing in. The cinema business and its taxation were always a state government subject being on the concurrent list till GST regime came into being. Each state made concessions for the new trend of multiplex building, giving them tax holidays and other sops. The old single screen cinemas that had no such benefits and old rates of taxations and about 20-plus licences to renew every year, stood no chance.

Single screen cinemas started closing down, depriving the masses of affordable entertainment. (A cinematographer of repute, Hemant Chaturvedi, who has shot films like Company, Maqbool, Ishaqzaade, Kurbaan and Brothers among many others, has embarked on a mission to click photographs of these closed down single screens all over Hindi belt of India, which are in a change of user status. He plans to compile his work into a voluminous book and that book will show the pathetic state of these cinema halls, which once enthralled thousands of people every week). It was an unfair deal meted out to the single screen cinemas that while multiplexes got all the benefits, there was no provision to protect the traditional single screens.

This example is necessary because the same is the case when it comes to the theatrical exhibition and OTT content. While the theatrical cinema is controlled by various regulations including the censorships, OTT content, so far, had no such ombudsman not watching over what they vended. Surprising that the various governments, which imposed censorship on films with such a heavy hand, let the OTT platforms enter uncontrolled since they made their entry in India! Like multiplexes killed the single screen, the unchecked OTT would certainly limit the appeal of the theatre-going experience! There has to be a level playing field.

So, now, rather late than never, the government at the Centre has woken up to this anomaly. The OTT and other digital content including the news portals will henceforth be subject to scrutiny by the Information and Broadcasting Ministry. The Cinematograph Act, which deals with the public exhibition of films, should have been amended the day the first OTT platform entered India. But, how will the government implement censorship on OTT is the question, since no government has been able to manage even the CBFC satisfactorily so far since the Cinematograph Act 1952!

How will the government control OTT content is the question. As a matter of fact, India has all the relevant laws to deal with all sorts of situations, but lacks grossly in its implementation. When it comes to films, there are guidelines laid down, for OTT there are no such guidelines. By going through the content that has already been released in the public domain, the Ministry can start with forming the basic broad guidelines and then work on fine-tuning gradually.

(The above story first appeared on LatestLY on Nov 15, 2020 11:49 AM IST. For more news and updates on politics, world, sports, entertainment and lifestyle, log on to our website latestly.com).