Dipika Chikhlia aka Sita from Ramanand Sagar's Ramayan in one of her interviews expressed to play Nirbhaya's mom Asha Devi on the big screen. Read on! 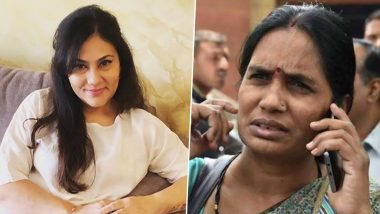 The re-run of Ramanand Sagar's iconic mythological show, Ramayan has benefited the starcast of the serial as their fan following is multiplying with each passing day. Dipika Chikhlia who essayed the role of Sita on the Doordarshan show also has been making headlines of late and the reason is ofcourse the re-telecast of the tale. Her role on Ramayan was indeed note-worthy as she got into the skin of the character as goddess Sita quite well. After already playing a powerful role onscreen, Chikhlia has how desired to portray one more inspiring character on the celluloid and its none other than Delhi rape victim Nirbhaya’s mother Asha Devi. Did You Know That Dipika Chikhlia Rejected Movie Roles Where Makers Asked Her to Wear Swimming Costumes and Body-Revealing Clothes? (Details Inside).

In a chat with NavbharatTimes, the veteran actress expressed that she would love to play Asha Devi’s character on the big screen. She said, “I still get shivers down my spine when I think about the Nirbhaya incident. It took seven years to get the justice she deserved and in these seven years, her mother Asha Devi stood like a rock for her daughter. Being a woman and a mother myself, I can understand what she went through in these last seven years.”

“The truth is that Nirbhaya's mother was living the daughter's death every day. If ever a film will be made on Nirbhaya's life for the benefit of society, country and women, then I would definitely like to play Nirbhaya's mother Asha Devi. I have to work in similar films whose characters are as strong and courageous as Asha Devi in real life." she added. Well, it will be interesting to see her playing Asha Devi.  Ramayan: Dipika Chikhlia Aka Sita Hits 100k Followers on Instagram, Thanks Her Fans for the Love (View Pic).

Dipika who became a household name with Ramayan will be next seen on the silverscreen in Gaalib. Apart from this, the actress is also said to feature as Sarojini Naidu in the fighter's biopic. The announcement with regards to the same will be done post lockdown. Stay tuned!

(The above story first appeared on LatestLY on Apr 20, 2020 04:58 PM IST. For more news and updates on politics, world, sports, entertainment and lifestyle, log on to our website latestly.com).