Did You Know That Dipika Chikhlia Rejected Movie Roles Where Makers Asked Her to Wear Swimming Costumes and Body-Revealing Clothes? (Details Inside)

While career doors for the Ramayan trio Arun Govil, Sunil Lahri and Dipika Chikhlia opened like never before, offers for the latter were something that the actress did not expect and did not appreciate 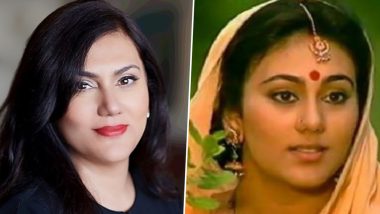 Actors Arun Govil, Dipika Chikhlia and Sunil Lahri, as the Ram, Sita and Laxman trio in Ramanand Sagar's Ramayan became household names, icons and even Gods for the audience. Their portrayal of the central characters of the Hindu epic is said to be iconic, and with the show re-airing on Doordarshan in times of the lockdown, the current generation is getting to know what brilliant acting of the 90s was like. Ramayan: Dipika Chikhlia Aka Sita Hits 100k Followers on Instagram, Thanks Her Fans for the Love (View Pic).

While career doors for the trio opened like never before, offers for Dipika Chikhlia were something that the actress did not expect and did not appreciate and take up as well, a report in News 18 Hindi read.

Deepika was quoted as saying, "I got a lot of offers after Ramayan. But most of them saw the makers ask me to don a swimming costume or wear body-revealing clothes. Or else I would get roles like Damayanti or Parvati's. All that the filmmakers wanted was to break my image of Sita and create a brand new one."

She continued, "But I knew that my fans had started considering me like a Goddess after watching Ramayan and I simply could not make the decision to break that image and hurt and disappoint my fans in any way." After Ramayan, Doordarshan to Air Uttar Ramayan; Here's The Telecast Schedule and Time For The Second Phase of Lord Ram and Devi Sita's Mythological Show on DD National (View Tweet).

"In fact, these offers were ones that paid me a lot of money. Some filmmakers even approached me with three-film deals and would say that they are willing to sign me right away for their next three movies, but I had to break away from my image of Sita. They would say that either I could break my Sita image or stay with it for the rest of my life and I chose the latter happily because the image I created (Sita) was a strong one," she concluded. Well, we are sure Deepika is not repenting her decision, for she is still the best Sita on Indian television for a huge audience.

(The above story first appeared on LatestLY on Apr 19, 2020 11:29 AM IST. For more news and updates on politics, world, sports, entertainment and lifestyle, log on to our website latestly.com).