Rappers Raftaar and Raja Kumari along with electronic music producer Nucleya are on a hunt for India's hip-hop star. 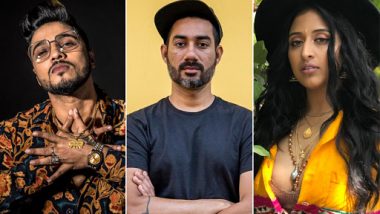 Mumbai: Rappers Raftaar and Raja Kumari along with electronic music producer Nucleya are on a hunt for India's hip-hop star. The three will turn judges for MTV Hustle, which is a reality show for rappers. Under their mentorship, select contestants will undergo rigorous training and gruelling face-offs to emerge as the best. Armaan Malik Imposter Gets Arrested For Blackmailing Women Using Their Nudes; Singer Requests Fans To Be Careful

"Rap has enabled artistes to push boundaries in music and express themselves to the best of their creative finesse," Nucleya said in a statement. "I am delighted to be a part of a concept like MTV Hustle that sets the stage for undiscovered talents to excel in the genre. This is one reality show that India truly needs. R Kelly Sexual Abuse Case: 11 New Charges Filed in Chicago Against the R&B Singer

"It's also my debut on national television which heightens the excitement further. I hope to be of value to the contestants as a mentor and musician and inspire them to perform better," he added. Raftaar has created the music track for the show that will go on air in August

(The above story first appeared on LatestLY on May 31, 2019 05:03 PM IST. For more news and updates on politics, world, sports, entertainment and lifestyle, log on to our website latestly.com).