Ray: Before Netflix Series Arrives, 10 Awesome Short Stories of Satyajit Ray You Should Not Miss Out on Reading! 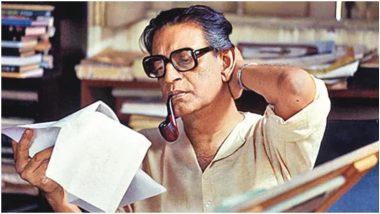 The late Satyajit Ray is a treasure every Indian movie biff should be proud of. He was a filmmaker par excellence who gave classics that are appreciated and revered worldwide, even by greats like Martin Scorsese. Why there is still a ringing accusation that Steven Spielberg's classic ET was lifted from a Hollywood film that Ray was trying to make in the West. Before you scoff at this idea, do a favour to yourself, and do read his short stories. The legend had a seriously vivid imagination worthy of lending itself to India's own Twilight Zone series. Satyajit Ray Birth Anniversary Special: 10 Movies of The Prolific Oscar-Winning Director Every Cinema Lover Must Watch.

While you may know him as the creator of Feluda and Professor Shonku, Satyajit Ray has written some amazing short stories, mostly in sci-fi and horror. Some of his short stories are nor inspiration for the new Netflix anthology Ray that is arriving on the platform. Ray stars Manoj Bajpayee, Ali Fazal, Harshvardhan Kapoor, Kay Kay Menon, Gajraj Rao, Shweta Basu Prasad, Anindita Bose, Radhika Madan, Chandan Roy Sanyal, Akansha Ranjan Kapoor and Bidita Bag. The segments are directed by Srijit Mukherji, Vasan Bala and Abhishek Chaubey. They are also based on Ray's stories.

Abhishek Chaubey's Hungama Hai Kyon Barpa is inspired by the story Barin Bhowmik-er Byaram (Barin Bhowmick's Ailment). Vasan Bala's Spotlight is based on the story by the same name. Srijit Mukherji's Bahrupiya is from Bahurupi and his Forget Me Not is from Bipin Chowdhury'r Smritibhrom (Bipin Chowdhury’s Memory Loss). Ray: Netflix’s Upcoming Star-Studded Anthology Series Is Based on Legendary Satyajit Ray’s Stories.

Before you check out the series, do get to read some of Satyajit Ray's other short stories preferably in the fantasy and the scary kinds, of which, we have the difficult task of listing ten of our favourite ones.

There is a special connection I have to Anukul because it is the first Satyajit Ray story I read, thanks to it being included in my school syllabus. Anukul is an human-like android who is bought on rental by a Bengali gentleman, who makes a very good househelp. There is a catch, though - he should never be physically assaulted. Something, his owner's uncle couldn't seem to understand.

An interesting but scary revenge drama, it is the story of Mr Shashmal who takes a room in a the guest room, where in the night, he is visited by the spirits of every animal he has killed in the past. It all leads to him revisiting something horrific that he committed recently before coming to the guest house.

If you have studied botany, you might be knowing about insectivorous plants like Venus Fly Trap. Well, Satyajit Ray takes a horrifying inspiration from such plants and turns one into a terrifying tentacled creation that eats perhaps humans too, and needs to be killed!

From a dangerous flesh-eating plant to an extinct monster bird coming back to life, Big Bill is about a man finding a huge egg in a forest and bringing it to his house, where it hatches to a weird bird. It doesn't take him much time to realise that his house isn't going to contain that bird, whose size and appetite get bigger by the day. The story has a nice twist in the end, that adds a touch of humour!

A man finds a diary of a British person who live in Bangalore years ago, and is mystified by the supernatural contents of it. He takes two acquaintances to visit that house and face the haunted truth, only to get an unexpected surprise!

A story so strange that I am curious Aahat has not been inspired by it (or has it?). A youngster wants to learn ventriloquism from an old hand, but his idol turns him down. Angry, the spurned man learns the art on his own, makes his own dummy and names him after the master. He begins to earn fame with his performances, but then the dummy begins to behave weirdly after the old man comes visiting.

What would happen if you come across an exact facsimile of yourself? Would you be friends with that person? Or would you not take kindly to having another person who looks just like you? Ratan Babu has this sinister dilemma during his holiday trip, and well, things don't go exactly well for him.

This bloodcurdling short story is about two men who visits a sadhu who has a call that brings a king cobra that drinks milk. One of the men, shockingly, ends up viciously killing the cobra, but strange things begin to happen to him.

A new resident in a hill station meets a bizarre old man there, who collects objects fallen on the road and claims to say he could see the fates of those objects' owners. Things become even weirder when a crime happens in the sleepy town, and the old man could tell how it happened.

Badan Babu, who has run out of stories to tell his son, finds a stranger who has a bizarre story to tell. He claims he is a time-traveller who has gone back to the times when dinosaurs ruled the Earth and has with hm a Pterodactyl's Egg. While the story ends with a black comic twist, Pterodactyl-er Dim shows the powerful hold good story-telling can have over a person.

(The above story first appeared on LatestLY on Jun 24, 2021 05:31 PM IST. For more news and updates on politics, world, sports, entertainment and lifestyle, log on to our website latestly.com).