Saath Nibhaana Saathiya 2: Rupal Patel Says She Is Done Playing Kokila Modi, 'I Have Lived the Character for 8 Long Years' 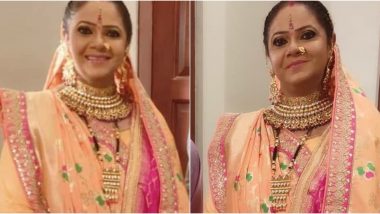 "I have lived each and every shade of the character. Maine nau ke nau ras ji liye is kirdar ke. Frankly speaking, there is nothing much left for me to explore in the character. It has lived its life and I have moved on now. However, it was a fruitful journey," the actress told the daily. Saath Nibhaana Saathiya 2: Rupal Patel, Devoleena Bhattacharjee and Mohammad Nazim to Quit the Show Soon?.

There were recent reports that Rupal had quit Saath Nibhaana Saathiya 2. Refuting them, she revealed that she was signed on the show for only a limited time. "For the record, I didn't quit Saath Nibhaana Saathiya 2. I was signed in for a month long period only. Apart from me and the makers, a few other people too knew that I will not be a part of the show for more than a month. However, when the makers requested me to shoot for a few days more for the second season, I happily did that as I owe them this," concluded Rupal.

(The above story first appeared on LatestLY on Nov 04, 2020 10:10 PM IST. For more news and updates on politics, world, sports, entertainment and lifestyle, log on to our website latestly.com).