The state of Maharashtra has gone into lockdown of sorts until April 30. With this, no unnecessary movement is allowed and TV/Films shoots also have come to a halt. Owing to the same, the producers of a few top serials have decided to shift the shooting location to another spot. Know where your favourite show will be shot amid the Janta Curfew in Mumbai. 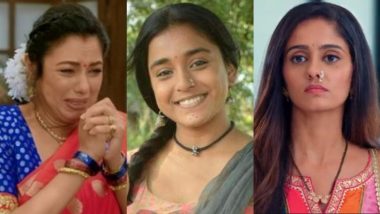 The state of Maharashtra has gone into lockdown of sorts until April 30. As the COVID-19 cases are on a rise, the government took this decision to break the chain and applied Section 144 in the state. With this, no unnecessary movement is allowed and TV/Films shoots also have come to a halt. Owing to the same, the producers of a few top serials have decided to shift the shooting location to another spot, with an aim to serve fresh episodes to the viewers daily. Here, check out where your favourite shows like Anupamaa, Imlie, Yeh Rishta Kya Kehlata Hai and more will be shot. Anupamaa Actors Alpana Buch and Nidhi Shah Test COVID-19 Positive (View Posts).

Looks like Hyderabad's Ramoji Film city is on many producers' minds. As reportedly, Star Plus' hit shows like Rupali Ganguly's Anupamaa, Sumbul Touqeer and Gashmeer Mahajani starrer Imlie and also Ghum Hai Kisikey Pyar Mein are to be shot there. That's not it, as Colors TV's Choti Sardarni and Namak Issk Ka also choose the Ramoji route.

Reportedly, the cast and crew of Ekta Kapoor’s Kundali Bhagya have already flown to Goa for the shooting. Apart from this, we also hear that Kumkum Bhagya, Mollki and Yeh Hai Chahatein might also shift their base to Goa for the time being. Full House Media has moved the team of Aapki Nazron Ne Samjha to Goa. Maharashtra 'Break The Chain' COVID-19 Guidelines: Section 144 Imposed in The State From 8 PM Tomorrow, April 14 For 15 Days; Know What Will Remain Open And Close.

If reports are to be believed then Shiny Doshi and Kinshuk Mahajan's Star Plus show Pandya Store will shift to Bikaner. Considering the vibe of the daily soap, it matches with the Bikaner location. Also, reportedly, Adhvik Mahajan's Teri Meri Ikk Jindri will be shot in Jaipur.

The daily soap which recently made it to the top five on the TRPs chart, Saath Nibhaana Saathiya 2 might be shot in Agra, Uttar Pradesh, as per the buzz in the tinsel town. Well, with this, all we can say is that the scenario is changing amid the testing times and all of us needs to be ready. Stay tuned!

(The above story first appeared on LatestLY on Apr 16, 2021 11:56 AM IST. For more news and updates on politics, world, sports, entertainment and lifestyle, log on to our website latestly.com).