If you happen to be a fan of Saath Nibhaana Saathiya 2, there is disappointing news for you all as Kokila Ben, Gopi Bahu and Ahem Modi might leave the drama anytime soon. Check out the full story inside. 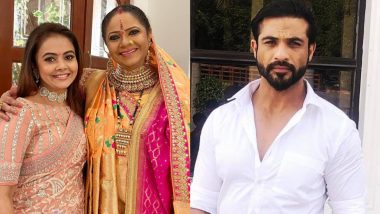 When the makers of Saath Nibhaana Saathiya announced season two of the hit daily soap, fans of the show were the happiest. As per the latest TRP report, SNS 2 has grabbed a spot in top five which means that viewers are loving the show and how. Rupal Patel as Kokila Ben, Devoleena Bhattacharjee as Gopi Bahu and Mohammad Nazim as Ahem Modi have reprised their roles. However, if you happen to be a fan of the serial, there is disappointing news for you all as the trio might leave the drama anytime soon. Saath Nibhaana Saathiya 2 Funny Memes Go Viral As Devoleena Bhattacharjee Aka Gopi Bahu Returns With New Season (Watch Teaser Video).

As per a report in Spotboye, the trio was roped in by the makers for a limited period of time." Not just Rupal Patel but Devoleena Bhattacharjee and Mohammad Nazim were brought in the season 2 for a finite period. As per which their track will be over next month. After which the story will focus on central character Gehna (Sneha Jain) and her journey in the Desai family," a source told the portal.

"Rupal signed the show for initial 20 episodes and accordingly the whole track was planned. And by mid of November, she will make an exit from the show. However, her character this season is also a hit and that's why the makers have decided to convince her to continue in the show. Though a final decision is yet to be made," the portal had reported earlier. Saath Nibhaana Saathiya 2 Promo: Kokila Says ‘Rasode Mein Kaun Tha?’ Once Again, Questions Gopi and Gehna About ‘Anda’ in the Prasad (Watch Video).

For the uninitiated, Rupal Patel, Devoleena Bhattacharjee and Mohammad Nazim have been loved by fans in SNS and if they quit the show, we might definitely see a fall in the TRPs. Also, apart from the three, Saath Nibhaana Saathiya 2 sees Snehal Jain and Harsh Nagar are the central characters. Stay tuned!

(The above story first appeared on LatestLY on Oct 31, 2020 12:16 PM IST. For more news and updates on politics, world, sports, entertainment and lifestyle, log on to our website latestly.com).