Devoleena Bhattacharjee as Gopi Bahu and Rupal Patel as Kokilaben made a comeback to the TV screens with Saath Nibhaana Saathiya 2 on October 19, 2020. Here's the latest promo from the show with 'Rasode Mein Kaun Tha' twist. Check it out. 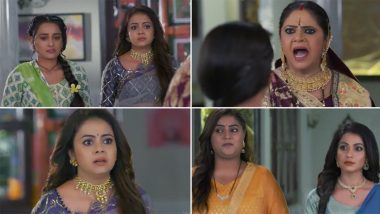 Devoleena Bhattacharjee as Gopi Bahu and Rupal Patel as Kokilaben made a comeback to the TV screens with Saath Nibhaana Saathiya 2 on October 19, 2020. Slowly and steadily, season two of the hit show is being loved by the audience. But if you remember, it was Kokila's dialogue 'Rasode Mein Kaun Tha?' turned into a rap which in a way led to the start of a new beginning. All that being said, many new characters have been added to the latest SNS. And well, taking viewers back in time, the makers have dropped a fresh new promo where Kokila once again says her iconic Rasoda dialogue. Saath Nibhaana Saathiya 2 Promo: Devoleena Bhattacharjee Makes a Comeback As Gopi Bahu And Drops A Hint About 'Gehna' (Watch Video).

The video starts with Kokila screaming Gopi Bahu's name and also questions her who made the Navratri's prasad. To which Gehna (Sneha Jain) comes into the limelight and says she cooked the prasad. Kokila then quizzes her about the ingredients she used while making the prasad and at last also asks if she put an egg in it. Gehna replies to Kokila saying she did not add anda in the prasad. This answer raises many eyebrows and so Kokila Modi finally asks Gehna when you left the kitchen, 'Rasode Mein Kaun Tha'. Saath Nibhaana Saathiya 2 Promo: Sneha Jain's First Look as Gehna Out; Devoleena Bhattacharjee Introduces the New Modi Family (Watch Video).

Well, this scene surely reminds us of the time when Rashi was the culprit and had placed an empty cooker on the gas. Coming back to the latest track, we are loving it how the makers are cashing in with the Rasoda dialogue and attracting fans. Stay tuned!

(The above story first appeared on LatestLY on Oct 24, 2020 08:06 PM IST. For more news and updates on politics, world, sports, entertainment and lifestyle, log on to our website latestly.com).