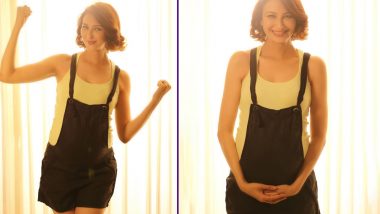 Happy times have arrived for the very pretty Saumya Tandon. The actress who tied the knot in a hush-hush ceremony in 2016 with her longtime beau Saurabh Devendra Singh in 2016, was rumoured to have quit her &TV show Bhabhiji Ghar Par Hai in July, because of her pregnancy.  And the rumours were indeed true as the actress has finally confirmed the same. The actress announced the same on Instagram with an adorable photo and a post. Saumya Tandon Quits Bhabhiji Ghar Par Hai? Find Out.

Woke up feeling like a magician today, feel like a superhero without a cape most days now, filled with blessing and godliness. Constantly excited by the buzzing in my head and the sudden pump of hormones; this promises to be a fascinating ride. The big news-I'm PREGNANT and trying to soak in every moment of it! Need your best wishes throughout. Thanks @sachin113photographer for capturing my happy moments. You are too sweet.

(The above story first appeared on LatestLY on Nov 13, 2018 03:34 PM IST. For more news and updates on politics, world, sports, entertainment and lifestyle, log on to our website latestly.com).