She was recently asked by the paparazzi that 'Rasode mein kaun tha' and she did not know anything about the topic! 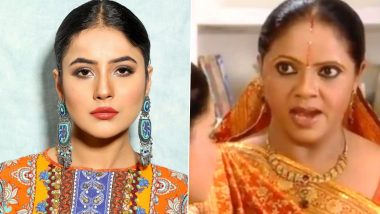 Reality show star Shehnaaz Gill is a such a social media darling. The Bigg Boss 13 contestant garnered a sea of fans with her beauty and innocence on the show. Her bond and chemistry with BB 13 winner Sidharth Shukla was also liked by everyone. She is a huge star on the internet but looks like she is not an avid user of the platforms herself. She was recently asked by the paparazzi that 'Rasode mein kaun tha' and she did not know anything about the topic! Shehnaaz Gill's Weight Loss And Transformation In Latest Pics Stun Her Fans!.

Musician and now-internet session, Yashraj Mukhate's musical rap on the Saath Nibhaana Saathiya's dialogues is a rage right now. There hardly must be someone who might not know about this addictive song that's currently viral everywhere. However, recently Shehnaaz was greeted by the paparazzi. The actress who was in a jovial mood posed and had a chat with the papz but was clueless when someone asked her jokingly 'Rasode Mein Kaun Tha!' Check out the video below.

Well, did she just not know about the most-talked-about video or was this her way of avoiding the media, we don't know! On that note, the second season of Saath Nibhaana Saathiya is soon to go on air. It stars Devoleena Bhattacharjee as 'Gopi Bahu' once again. So, stay tuned for more updates.

(The above story first appeared on LatestLY on Sep 02, 2020 10:09 PM IST. For more news and updates on politics, world, sports, entertainment and lifestyle, log on to our website latestly.com).