Siddhant Karnick and Megha Gupta Get Divorced, Former Says 'Two Good People Might Not Make for A Great Marriage'

Differences in terms of space cropped up between the couple last year and they had decided to live separately. However, in Sidhant's own admission, after nothing worked out, the couple filed for divorce. 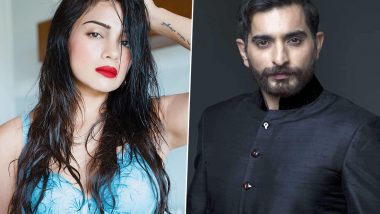 And 2020 has claimed its first marriage casualty. Actors Siddhant Karnick and Megha Gupta, who tied the knot on April 16, 2016, headed their separate ways last year and their divorce came through a few days back. The actors first met at Vivian Dsena and Vahbbiz Dorabjee's party back in 2015 and that's when they struck a bond. A year later, they made their relationship official and tied the knot in a low key ceremony after the bride lost her father. 6 months later, Megha and Siddhant got married again with complete band baaja baarat in Nashik. Kaal Bhairav Rahasya 2 REVIEW: This Gautam Rode-Additi Gupta Starrer Successfully Maintains Its Thriller Element.

However, differences in terms of space cropped up between the couple last year and they had decided to live separately. However, in Sidhant's own admission, after nothing worked out, the couple filed for divorce.

Talking about what went wrong in their marriage, Siddhant in a conversation with Bombay Times revealed, "No marriage is easy. In our case, I would say that we ran out of patience. In any relationship, peace of mind is of paramount importance. It’s like you pinch yourself on your arm and keep that pressed… after some time, you get used to it and live with it. Then suddenly, when you separate and that pinch goes away, you feel, ‘Oh, my God! I was missing this peace of mind’. That’s the best way I can summarise my marriage. Megha and I went for therapy and tried to do everything we could to make it work, but in vain. We even started living separately in March last year. We felt that it would be better if we lived apart for some time and see if distance made the heart grow fonder. However, we realised that we had more peace of mind when we were not together."

Our chaddi chappal and chilled beer date nights. to you my lover (and all of Instagram) may our love and light continue brilliantly. @meghaguptaofficial pic credit..@randomguy . . #burinazarwaleteremoohparthappad #letthefunbegin #lovethisseason #instagram #instamood #instalike #Actor #siddhantkarnick #boom

Adding that there was no case of love having flown out of the window in their marriage, Siddhant said, "It's not that we weren’t good together. In fact, we were great together. She is a great travel partner and I have some of the best travel memories with her. But I guess, there was so much more that we were both looking for. That’s when we decided to go our separate ways. I have realised that two good people might not make for a great marriage."

Fortunately for both Siddhant and Megha, their divorce was amicable and what we can call a mature separation combined with their respective families' full support. "Divorces can get ugly, but fortunately, it didn’t turn ugly for us. That’s because Megha and I decided to leave when there was still a little love left between us, which helped us sail through. Marriage is not just between two individuals, but two families and our families realised that life is more than just marriage," revealed Siddhant.

Siddhant also revealed that he was now focussing on himself and added, "When you are married, you start thinking for the two of you and ignore yourself most of the time, which is not healthy for a marriage. You should always have your own space and identity, which I guess I had lost somewhere. Right now, I am being on my own and being in a relationship isn’t a priority."

(The above story first appeared on LatestLY on Mar 11, 2020 09:11 AM IST. For more news and updates on politics, world, sports, entertainment and lifestyle, log on to our website latestly.com).