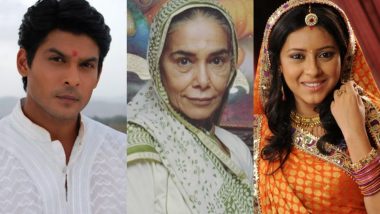 Sidharth Shukla's sudden demise has sent shockwaves in the industry. Fans of the actor mourned the death of the Balika Vadhu star on social media. It's disheartening to see a young actor who had so much to prove in showbiz passing away at a young age. However, it's also tragic to know that we've lost three main stars from the iconic serial Balika Vadhu. We are talking about Pratyusha Banerjee, Surekha Sikri, and now Sidharth Shukla. In the span of five years, Balika Vadhu has lost three artists, and it's heartwrenching. Sidharth Shukla Dies at 40: Balika Vadhu, Broken but Beautiful 3, Humpty Sharma Ki Dulhania – Career-Best Roles of the Bigg Boss 13 Winner.

It was on April 1, 2016, when Pratyusha Banerjee, who played Anandi on the show Balika Vadhu passed away at 24. Her body was found hanging at her Goregaon residence. She was taken to Kokilaben Ambani hospital in Andheri by her live-in boyfriend Rahul Raj Singh, where the doctors declared her dead. Later on, Pratyusha's parents had filed an FIR against Rahul for torturing her and blamed him for their daughter's death. Sidharth Shukla Dies at 40: Balika Vadhu, Broken but Beautiful 3, Humpty Sharma Ki Dulhania – Career-Best Roles of the Bigg Boss 13 Winner.

Three-time national award-winning actress Surekha Sikri who had suffered a brain stroke in 2020, breathed her last at the age of 75 after suffering a cardiac arrest in July 2021.  Her bitter-sweet role as dadisa/ Kalyani Devi from Balika Vadhu is still fresh in the minds of the audience. Remembering Sidharth Shukla: Not Humpty Sharma Ki Dulhania, This Forgotten 2007 Film Was the Late Actor’s Bollywood Debut (LatestLY Exclusive).

Sidharth Shukla died at the age of 40 on September 2, 2021. His mortal remains were brought to Mumbai's Cooper Hospital in the morning. As per Mumbai Police, his cause of death is still unknown as an investigation is in process. Sidharth played the role of a district collector Shivraj Shekhar on Balika Vadhu.

For the unaware, Balika Vadhu was among the top-rated shows during its time and was based on child marriage and other taboos with regards to women in Indian society. All, we can say that it's indeed sad to see three gem of stars from the same show no more among us. May their souls RIP.

(The above story first appeared on LatestLY on Sep 02, 2021 04:02 PM IST. For more news and updates on politics, world, sports, entertainment and lifestyle, log on to our website latestly.com).