Sidharth Shukla and Shehnaaz Gill, who are fondly known as SidNaaz by fans, had created a huge fan base with their adorable chemistry on the controversial reality show Bigg Boss 13. 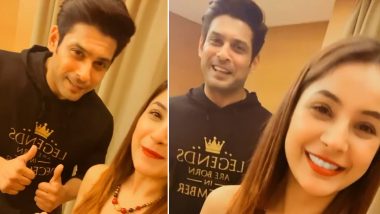 Sidharth Shukla and Shehnaaz Gill, who are fondly known as SidNaaz by fans, had created a huge fan base with their adorable chemistry on the controversial reality show Bigg Boss 13. Sidharth, who is known to be a hot headed guy, fans could see his calm and sweet side as well whenever he used to spend time with Shehnaaz on the show. There might have been ups and downs between the duo during their inside Bigg Boss house, but that never stopped them from being great pals. Ever after the show ended, Sid and Naaz came together for a music video and even that turned out to be a huge hit. And today being Sidharth Shukla’s birthday, how would Shehnaaz Gill not share something special for him on social media? Sidharth Shukla Birthday: Smart, Fuss-Free and Dapper, Bigg Boss 13 Winner's Style Mantra Should Be Followed By All Men Out There (View Pics).

Shehnaaz Gill has shared the sweetest birthday post for birthday boy Sidharth Shukla in which she is seen all smiles as ever and wishing him. Sid, who has turned 40 on December 12, can be seen having fun with Shehnaaz in this video. As the beauty extends her heartfelt birthday wishes to the Bigg Boss 13 winner, he responds saying, “Oh accha, aisa hai kya. Ok, thank you”. Well, one just cannot get away with their cute bond. Sidharth Shukla Reveals What He Likes the Most About His ‘Shona Shona’ Co-Star Shehnaaz Gill.

Sidharth Shukla who was recently seen with Shehnaaz Gill in the music video titled “Shona Shona” had stated, “The comfort zone definitely makes it easier when you already know someone. However, the challenge always is how do you make it better because fans have seen you in two projects together that how do you take things to the next level,” reports Pinkvilla. Here’s wishing Sidharth a very happy birthday and a joyous year ahead!

(The above story first appeared on LatestLY on Dec 12, 2020 09:11 AM IST. For more news and updates on politics, world, sports, entertainment and lifestyle, log on to our website latestly.com).