Star Wars Visions Review: A Galaxy Far, Far Away Is Coupled With Anime in This Action Packed Series on Disney+ Hotstar (LatestLY Exclusive)

Star Wars: Visions is a spinoff anthology anime series based on the Star Wars universe. It features a voice-cast of Joseph Gordon-Levitt, Temuera Morrison, Neil Patrick Harris, Karen Fukuhara and Simu Liu among others. 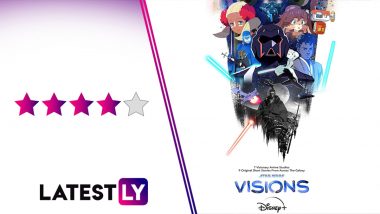 Star Wars Visions Review: George Lucas has openly described Star Wars being heavily inspired by Japanese Samurai stories, especially Akira Kurosawa's Hidden Fortress. The story of a farm boy taken under a mentor’s wing trying to topple an empire with swords, does sound like a plot from the Kurosawa era of Samurai films. So it was fun to see Star Wars come full circle and embrace that nature and create something closer to Samurai films in general. Star Wars Visions: Trailer, Cast, Plot, Streaming Date - All You Need to Know About Lucasfilm’s Upcoming Anime Disney+ Series.

Star Wars: Visions is an anthology anime series set in the Star Wars universe, but isn’t canon to the main timeline of the series. These nine shorts are created by some of the best anime storytellers in the world who are given carte blanche to make whatever they want, and the results are amazing.

All nine episodes feature distinct art styles made by different animation studios. This helps in the episodes feeling fresh and they have their own visual flair to it. Lightsabers come in various varieties with some of my favorites being a Katana Lightsaber and an Umbrella Lightsaber. As weird as an umbrella Lightsaber sounds, believe me, it kicks ass. Talking about Lightsabers, the fights with them are flashy and amazing. They have the perfect feel of an anime fight and each Lightsaber clash feels like it has some weight to it. The fights feel personal and it’s what made them so compelling.

The stories are also unique and fun. Stories range from classic Samurai Stories to something what you would see in Star Wars. The stories help maintain a nice balance of themes and characters don’t feel similar. I think the highlight for me over here has to be The Duel and The Twins. The Duel is a black and white episode that feels the most Kurosawa like out of every other episodes. It was packed with some great visuals with a warrior walking against the wind featuring. The Twins also featured a great concept and had a brother and sister fighting over a kyber crystal while aboard a conjoined Star Destroyers in space. The visual of two Star Destroyers being connected to each other created a great sense of difference between the point of views of these siblings. OTT Releases Of The Week: TVF’s Kota Factory Season 2 on Netflix, Simu Liu’s Star Wars – Visions on Disney+ Hotstar, Jayasurya’s Sunny on Amazon Prime Video & More.

Also not to mention the cast is stacked out as hell. It features some really fun voice-cast like Joseph Gordon-Levitt, Temuera Morrison, Neil Patrick Harris, Karen Fukuhara and Simu Liu to name a few.

Star Wars: Visions while still scratches that itch of more anime for you, it did eventually left me wanting more.While there were some episodes that felt incredibly fleshed out in just 13 minutes, I wish some of them had more to it. There is great potential over here, especially from the first frame of the first episode, and I wish if there is a second season there is a more definitive feel to these.

Also with artists being given carte blanche of course, there are times where the series won’t feel like Star Wars. For example The Duel manages the tone of a Samurai film while being Star Wars exceptionally well, but then some episodes just have those few moments where the feel of a galaxy far, far away isn’t there.

- Sometimes the feel of Star Wars isn’t quite there

(The above story first appeared on LatestLY on Sep 22, 2021 07:37 PM IST. For more news and updates on politics, world, sports, entertainment and lifestyle, log on to our website latestly.com).