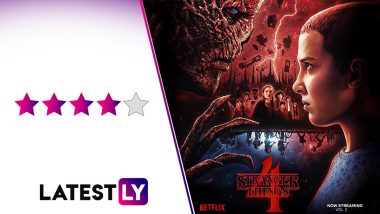 Stranger Things Season 4 Vol 2 Review: Never since the episode of "The Longest Night" from Game of Thrones, was I so invested in the happenings of a show as how I felt about the second parter of Stranger Things Season 4. Only that by the time the darkness blew away from the GoT episode, I was sort of disappointed with how the events turned out there, but Stranger Things Season 4 Vol 2 thoroughly left me enthralled and thrilled and captivated and of course, heartbroken (and a little annoyed as well). And yes, it also made me salivate in anticipation as to what the Duffer Bros has in store for the doomed town of Hawkins for the final showdown. Yes, there are a few flaws, but overall, this series still remains in fine form, despite the lengthy episodes. Stranger Things Season 4 Part 1 Review: This Is the ‘Avengers Infinity War’-Level Adventure for the Netflix Saga!

I will try my best to not put major SPOILERS here, but still apologies for the minor ones without which I cannot discuss certain aspects. So yeah, our band of heroes are still split in four factions - Eleven (Millie Bobby Brown) at her 'Papa's lab (Matthew Modine), trying to come in terms of the realisation of what she did with 'One' and about opening this world to Upside Down. Mike (Finn Wolfhard), Will (Noah Schnapp), Jonathan (Charlie Heaton) and Argyle (Eduardo Franco) are back on the road to save Eleven before the military gets to her.

Nancy (Natalia Dyer) who we last saw being mind-trapped by Vecna (Jamie Campbell Bower), is made to see what his ultimate plan is to do with their world. I have no clue why he would do that, and TBH, his end-game is somewhat cliched, which some of the Marvel supervillains are known to do. Anyway, Nancy manages to get back to her world and along with Steve (Joe Keery), Dustin (Gaten Matarazzo), Max (Sadie Sink), Lucas (Caleb McLaughlin), Robin (Maya Hawke) and Eddie Munson (Joseph Quinn), she tries to figure out how to stop him from destroying their town.

Back in Russia, Joyce (Winona Ryder) and Murray (Brett Gelman) rescue Hopper (David Harbour) from his imprisonment, but they realise they are far away from danger. And without having time to reunite, these sub-teams need to find ways to stop Vecna from taking over the world.

In my review of Stranger Things Season 4 Part 1, I had mentioned how the season is set up to feel like Avengers: Infinity War. Well, I feel the goals of Duffer Brothers weren't too far from Russo Bros' cinematic event. Which more or less, continues to be obvious in Season 4 Vol 2, especially how it goes for that bitter-sweet conclusion. Why is there even a scene where Vecna uses pieces of wood like arrow-heads, the same way Ebony Maw did with bricks in Infinity War.

In terms of creating 'Infinity War' kinda spectacle for small screen, the showrunners succeed to a large end. There is a relentless thrill to not knowing what is going to happen next, there is a lingering fear if your favourite character is going to bite the dust by the minions of Upside Down, and you are absolutely enthralled by the imagery and the visuals the show has in display for us.

Be it Eleven bringing down a chopper in what I claim is the most badass moment of the show or perhaps, even on television, or Eddie strumming Metallica's "Master of Puppets" on a rooftop in Upside Down, you can't help but be captivated by the visuals, VFX and the kind of scale, mostly reserved for the big screens, that the showrunners bring to the TVs in your rooms. Isn't this what entertainment is supposed to be? BTW, is it me, or has the show gone less gory this season?

But sometimes you get so fascinated with the visuals and the performances (top notch as always) that you ignore the writing is not often up to the mark. But once the dust settles down from all the action, you can begin to see the craters. This might be a little SPOILER, but there is only one MAJOR death that will truly impact you as a viewer. I am not saying who it is, but while I felt really bad for the person, especially the way she or he or they was built throughout the season, the person's demise felt like Stranger Things wholeheartedly accepting the cliche of how it has dealt with the deaths of certain fan-favourite characters in the past. Kinda lowers the stakes in a way for the main characters. OTT Releases of the Week: Millie Bobby Brown’s Stranger Things Season 4 Vol 2 on Netflix, Chris Pratt’s The Terminal List on Amazon Prime Video, Shraddha Srinath’s Dear Vikram on Voot Select and More.

Another annoying cliche is something it borrows from IT movies (which it seeks parallels from, and also has Finn Wolfhard in common) is in the treatment given to vengeful Jason Carver (Mason Dye), that is similar to Henry Bowers in the other saga - a character used only for needless, forced tension. When Vecna is spelling doom for our characters with his mind-control, creeper stuff and potential world-ending plans, a bullying jock hardly seems someone to feel concerned about, and the caricatured way he is dealt with is irksome to say the least. Also, how many times will we see Eleven coming in terms of how powerful she is, and that realisation helping overcome her foes?

The season also doesn't allow Mike and his faction to do much in terms of being involved in the action, as they felt more of a support for a rescued Eleven. Despite, Will's insistence that Mike is the 'heart' of their gang.

This time, their leader does take a backseat. However, this faction gives two well-acted scenes, both involving Will, and both helping in a major way to develop these characters. One had Will talk to Mike about the whole 'heart' thing and the other had Jonathan assuring Will that his elder sibling will always be for him (Noah Schnapp is truly the most underrated player in the series, Sadie Sink is another). It is these moments (Dustin talking to the relative of the deceased is another tear-jerker, as well as Max having a heart-to-heart chat with Lucas) that actually - as Will puts it - the heart beating amidst the dark visuals, thrilling action setpieces and fan-baiting bonhomie. Just thank goodness for that, without which Stranger Things won't be the cultural phenomenon that it is now.

- The Performances, The Visuals, The Thrills and The Execution

- Sticking to Certain Cliches That Make It Kinda Risk-Averse

Stranger Things Season 4 may not be the perfect season but it puts the show on the pedestal of being the most ambitious, most attractive and the most engaging saga in recent times. Writing issues and cliches aside, the series brings the best from the actors, the technical team and the direction, and makes you crave to know what Duffer Bros are planning to bring on the table for the ultimate showdown in the next season. Stranger Things is streaming on Netflix.

(The above story first appeared on LatestLY on Jul 01, 2022 07:25 PM IST. For more news and updates on politics, world, sports, entertainment and lifestyle, log on to our website latestly.com).