The urban, unique love story of two lesbian women is adapted from novelist Manju Kapur’s book of the same name. The show will be set with a backdrop of India in 1992. 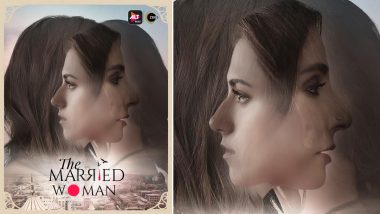 It was back in January 2020 when Ekta Kapoor announced her new project titled The Married Woman. Starring Ridhi Dogra and Monica Dogra, the show will be showcasing the story of two women who fell in love and fought for it. The web series was supposed to release last year only but due to the pandemic, the release got delayed. Today, sharing that the web series is going to premiere really soon, Ekta shared a new compelling poster of the show. Ekta Kapoor Celebrates 9 Years of Sakshi Tanwar-Ram Kapoor's Bade Achhe Lagte Hain, Nephew Laksshya Plays Signature Tune.

Featuring the leading ladies - Ridhi and Monica's faces merged into each other's, the poster gives a very regal vibe. There are whitewashed monuments and building in the background and Richa and Monica's look is very intense.  The urban, unique love story of two lesbian women is adapted from novelist Manju Kapur’s book of the same name. The show will be set with a backdrop of India in 1992. Love blossoms between the two women while riots after the Babri Masjid demolition created unrest in the country.

What is love? A question we ask ourselves, until we meet the RIGHT ONE.

Astha finally felt love when she crossed paths with a kindred spirit, a soul that connected with hers.

Talking about The Married Woman, Ekta had earlier said, "Creative spaces are at times compelled to conform to boundaries. As a creator, I have challenged those norms, at times pushed the envelope. This is the freedom we crave, we celebrate. However, I am cognisant that freedom comes with responsibility. That’s what my show is … creative freedom to tell a different story with responsibility towards my viewers while respecting the creative desires of my team.” Ekta Kapoor's Shows Kasautii Zindagii Kay 2, Kumkum Bhagya, Naagin To Star Shooting From June 26?

The Married Woman will also mark Ridhi Dogra's digital debut. Talking about the same she had said, “ As an artist, I really didn’t have any inhibition. I was sure if anyone must make such a show it should be coming from Ekta because she is truly a boss babe. I think this is a huge opportunity for me, great space and I am so glad that I waited so long for this one.” The series also stars Suhaas Ahuja, Rahul Vohra, Ayesha Raza, Divya Seth, Imaad Shah and Samridhi Dewan and will premiere on March 8 on Zee5 and ALTBalaji.

(The above story first appeared on LatestLY on Feb 09, 2021 04:29 PM IST. For more news and updates on politics, world, sports, entertainment and lifestyle, log on to our website latestly.com).