The Simpsons may have earned the reputation of predicting the future but the makers' recent move of ripping the show's parent company has become the talk of the town. 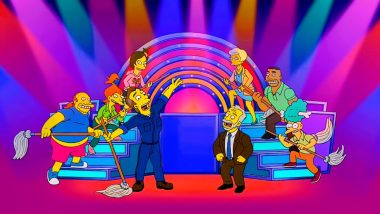 The Simpsons may have earned the reputation of predicting the future but the makers' recent move of ripping the show's parent company has become the talk of the town. The season finale of 'The Simpsons' called out Fox News and Facebook for spreading misinformation, stoking fear and, well, a fondness for dictators, reports 'Deadline'. Coachella 2022: Danny Elfman Performs ‘The Spider-Man’ And ‘The Simpsons’ Themes At The Music Festival (Watch Videos).

A few days after Fox made a portfolio pitch to advertisers at its upfront showcasing Fox shows, including The Simpsons, and Fox News in the same breath, Matt Groenig & Co. shot back. As per 'Deadline', at one point, a Tucker Carlson-like character is shown saying, "Putin for president, next on Fox News." Billie Eilish to Star in The Simpsons Special; New Short to Stream From April 22 on Disney+.

At another point the lyrics, "Facebook feeds our fright. They convince us things were great when gas was cheap and men were white" are heard as a Mark Zuckerberg-like character presses a red button that reads "death of democracy." "I'm saying you'll definitely never get a job like your dad's, and you'll have a tough time finding something significantly worse," sings the character.

He's joined by Clinton-era U.S Labor Secretary Robert Reich - playing himself - who intones, "The decline of unions, rampant corporate greed, Wall Street malfeasance and the rise of shortsighted politics all contributed to increased economic inequality, widespread real unemployment, wage stagnation, and a lower standard of living for millions of Americans."

Simpsons writer Tim Long tweeted that producers "recorded both @RealHughJackman and @RBReich last November. Jackman was a dream, doing take after take after take. At one point, he announced, 'I love singing!' And it shows!" He also tweeted, "little over a year ago, the @Atlantic published this piece. This Sunday, the show responds - in the form of a crazy eight-minute musical number, written by me and @LarryIsOKeefe, and featuring @RealHughJackman and Robert Reich @RBReich!"

He further revealed that the inspiration for the segment was a piece last year in the Atlantic titled 'The Life in 'The Simpsons' Is No Longer Obtainable'. That story details how the 1990s-era lifestyle of America's favourite dysfunctional animated family is now "an almost dreamily secure existence (sic)."

(The above story first appeared on LatestLY on May 24, 2022 06:12 PM IST. For more news and updates on politics, world, sports, entertainment and lifestyle, log on to our website latestly.com).

Comments
Tags:
Apu in The SImpsons fox news Fox News and Facebook The Simpsons The Simpsons Season Finale The Simpsons' Season 33
Comments
You might also like