Loki saw unprecedented love when it premiered last Wednesday on Disney+ and Disney+Hotstar. So much was the craze that it has managed to topple The Falcon And The Winter Soldier's first-day viewing record. It's not the only one though. Wanda Vision was defeated too! 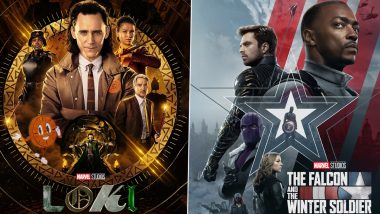 Loki premiered last Wednesday and the MCU fandom hasn't been the same. Tom Hiddleston's performance has been getting a lot of praise and so is his banter with Owen Wilson's Mobius. Loki cried over his family which made fans of the series go crazy. So it isn't surprising to see how the first episode of the series managed to topple The Falcom And The Winter Soldier, yet another fan favourite. Loki was watched by 890K U.S. households, as reported by Samba TV. In fact, it is higher than every Marvel shows on Disney+. Loki: Who Is DB Cooper? Know More About the Real-Life Mystery Plane Hijacker Referenced in Tom Hiddleston’s Marvel Disney+ Series! (LatestLY Exclusive)

The Falcon And The Winter Soldier was watched in 759k households while Wanda Vision was watched by 655k of them, in their premiere episodes. SambaTV measures streaming viewership in 3 million terrestrial smart TV households for at least five minutes. Loki Review: Tom Hiddleston’s God of Mischief Is Back in Style and His Banter With Owen Wilson Makes This Marvel Series Tick! (LatestLY Exclusive)

Want a closer look at how viewership stacked up for the #Loki series premiere compared to previous #Marvel series on #DisneyPlus? Here's the breakdown of premiere day viewership: pic.twitter.com/cSRIXvrsJX

As for India, we don't have a legit parameter or agency that tracks these views. OTT platforms do try to peddle how many views a particular content has got but there are no comparing statistics.

(The above story first appeared on LatestLY on Jun 11, 2021 12:33 PM IST. For more news and updates on politics, world, sports, entertainment and lifestyle, log on to our website latestly.com).

Comments
Tags:
disney Loki The Falcon And The Winter Soldier Tom Hiddleston Wanda Vision
Comments
You might also like