Loki Review: Tom Hiddleston’s God of Mischief Is Back in Style and His Banter With Owen Wilson Makes This Marvel Series Tick! (LatestLY Exclusive)

Loki is the next series in the Marvel Cinematic Universe, that is directed by Kate Herron. Tom Hiddleston reprises his character from the Marvel movies, and the series also stars Tom Hiddleston, Owen Wilson, Gugu Mbatha-Raw, Sasha Lane, Wunmi Mosaku, and Richard E Grant. Loki streams on Disney+ Hotstar Premium in India from June 9. 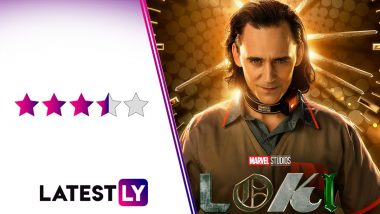 Loki Review: Okay, before I talking about Kate Herron's Loki, there is something on my mind that I need to clear about all the Marvel's Disney+ series first. Are they being made to plug the loopholes between the movies? Like in WandaVision was about giving a closure to Wanda Maximoff and Vision's tragic, short-lived relationship. The Falcon and the Winter Soldier was more about phasing Sam Wilson into being the next Captain America (as well as the disturbing consequences of the 'Blip') at least in fans' minds before Captain America 4. Now Loki's purpose is to deal with ramifications of time-meddling, as seen in Avengers: Endgame, and the subsequent branching out of the multiverse that would play into Doctor Strange in the Multiverse of Darkness (and also perhaps in MCU's X-Men movies). Loki Early Reactions: Tom Hiddleston As the God of Mischief Is on Fire, Say Critics!

As you might be remembering, the last we saw Loki (Tom Hiddleston) - no, not the one killed by Thanos in Infinity War - he had thwarted the Avengers' plan to retrieve Space Stone from the past and escapes with the Tesseract. The Tesseract lands him in Gobi Desert, where the mysterious Time Variance Authority (TVA) takes him into custody.

The TVA are a group of beings, appointed by three unseen Time-Keepers, to control disruption of time. Loki learns that the TVA is responsible for plugging in the Nexus Points - any branching that disrupts the flow of Time. Something that Loki's escape caused (he is further irked that Avengers aren't punished for doing actual time-travelling). The God of Mischief is baffled that none of his magic seems to be working to where he is taken. He is even more shocked to find out that even the Infinity Stones are powerless there; the staff use them as paperweights!

To add to his consternation, Loki is told that he is merely a variant, a product of his own meddling, and hence he must be destroyed. Thankfully for him, another TVA employee Mobius (Owen Wilson) gets him a reprieve as he wants to use Loki's skills to catch a dangerous variant who keeps escaping from their clutches.

For review purposes, I got the opportunity to watch two episodes of the series, which was really smart, for it was in the second episode that I could gauge the threat aspect, the direction and the intent Loki wants to adopt. The first episode wasn't bad. It gives a nice intro to the strange world of TVA, where Time works in unusual ways. The first episode is all about expositing about what TVA is, as well getting the best of Loki's highlights in the MCU through some smartly used narration device, as Morbius tries to understand how Loki's mind works, leading to a fine revelation of how genocidal dictators' mindset truly works. In the process, we get to see some fantastic camaraderie between Hiddleston and Wilson that is what makes the first episode so fun to watch.

It is also interesting to see Owen Wilson on the other side of the bromantic spectrum where he is the less talkative one. Another smart casting choice is to use Tara Strong to voice Miss Minutes, knowing her fabulous work in animation (her voice-work for Harley Quinn in Arkham videogames is simply the best). The first episode is ambitious yet a whole lot contained, with plenty of fun moments. Especially the show's spin on one of real-world's most famous mysteries, the saga of DB Cooper (do Wiki him out before checking the episode). It also allows Hiddleston to go Bond, making the British actor an tangible choice to fill Daniel Craig's shoes after he is done with 007. The track also helps us understand how Loki was more familiar with Earth than Thor when the latter arrived on Earth for the first time. Loki Star Tom Hiddleston Is a Huge Shah Rukh Khan Fan and This Video Proves It All!

Hiddleston's performance during the scene where he gets to revisit his mother's demise is just fantastical (although getting emotional over a few seconds of reel is hardly believable, he should have been confused at best). There is a little niggle about how suddenly Loki has becomes co-operative for being someone who, in real time, was about to let aliens rule over the Earth by destruction a few hours back.

But the show doesn't let go of the character's opportunistic tendencies, while playing well-along with his anti-hero image. The second episode builds on that, while also expanding on the dangers that Loki and TVA is facing through the fugitive variant they have been chasing. If you are already unaware of the SPOILER, let's say that it is MCU once again sticking to the protagonist facing a foe similar to him in powers. In this case, well, someone a bit too similar... Unless Marvel is planning to surprise us with some rug-pull. As of now, Loki is weird and bizarre and a little chaotic, but that's what makes it fun to watch!

- The First Episode Way Feels a Bit too Expository (but needed)

Two episodes might not be enough to grade a show, but at least we can tell that Loki has taken off to an arresting start. Mostly benefitting from Hiddleston's charming performances and Wilson dialling up that charm with his presence, Loki dials up the weirdness that WandaVision revelled us in a few weeks back. The show is arriving on Disney+ Hotstar Premium in India from June 9.

(The above story first appeared on LatestLY on Jun 08, 2021 09:30 PM IST. For more news and updates on politics, world, sports, entertainment and lifestyle, log on to our website latestly.com).