Ever since the first trailer dropped fans had been speculating if the scene was inspired by the case of one DB Cooper. By yesterday’s episode, it was confirmed that it was indeed the case. Read on. 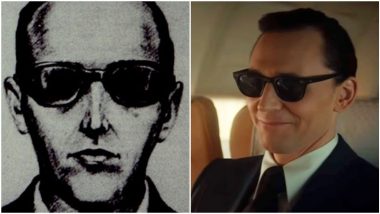 The first episode of Loki premiered on June 9 and has fans excited for the return of the God of Mischief to the Marvel Cinematic Universe (MCU). The series penned by Michael Waldron picks up right from the events of Avengers Endgame (2019) where Loki from the 2012 timeline can be seen escaping with the Tesseract. He is then quickly apprehended by the Time Variance Authority (TVA) who along with agent Mobius is set on a task. Loki Review: Tom Hiddleston’s God of Mischief Is Back in Style and His Banter With Owen Wilson Makes This Marvel Series Tick! (LatestLY Exclusive).

An interesting portion of the first episode was Mobius giving Loki a rundown of all the things he has done in the past, and one of them involved Loki hijacking a plane for ransom and then going for a mid-air escape, just for the sake of mischief. And he does that under the alias of DB Cooper!

Now DB Cooper is not a random name that has been chosen. In fact, ever since the first trailer dropped fans had been speculating if the scene was inspired by the case of one DB  Cooper. By yesterday’s episode, it was confirmed that it was indeed the case. Loki Episode 1: Seven Highlights from the Premiere of Tom Hiddleston and Owen Wilson’s Disney+ Marvel Show.

So who is this DB Cooper, who finds a place in the Marvel series? The answer is, no one knows! Confused? Read on...

DB Cooper is an epithet that’s used to describe an unidentified man who hijacked a Boeing 727 aircraft in United States airspace between Portland and Seattle on the afternoon of November 24, 1971. After a stop at Seattle airport, he demanded a ransom of $200,000 after he slipped a note to the flight attendant saying that he had a bomb with him. He released the passengers after his demand was met and ordered parachutes while detailing his flight plan to the cockpit crew. When the plane took flight again, he jumped off from the rear end of it with the cash and a parachute to an uncertain fate while the plane was over southwestern Washington.  Loki Early Reactions: Tom Hiddleston As the God of Mischief Is on Fire, Say Critics!

To this day DB Cooper is the only air piracy case that has remained unsolved. It led the FBI on an extensive manhunt and till this day no one knows who he was or what his real alias is and all we have is a sketch of his appearance, we are even uncertain about his fate because nobody was found during the investigation. He purchased his airline ticket using the alias Dan Cooper but because of a new miscommunication, it got termed as DB Cooper. It’s been 45 years since this act of robbery was committed, some say he didn’t survive the fall but some like to believe otherwise, and has become quite the mythical tale. HBO even had a documentary on this mysterious man.

Watch the trailer of HBO documentary below:

It was fun seeing Loki embrace this real-life mystery and showcasing that Loki is THE DB Cooper of the Marvel Cinematic Universe. Although the end events do playoff differently with Loki getting pulled into the Bifrost and him committing this act because he lost a bet to Thor, it feels like something that the character would do and perfectly fits into the world of Marvel. It also makes us wonder how many real-life mysteries would Loki be involved in? Who knows, he could be the Loch Ness Monster or the Abominable Snowman too?

(The above story first appeared on LatestLY on Jun 10, 2021 09:34 PM IST. For more news and updates on politics, world, sports, entertainment and lifestyle, log on to our website latestly.com).