Starring Aanjjan Srivastav, Bharti Achrekar, Sumeet Raghvan and Pariva Pranati, the show will revolve around how the new characters face a newer set of dilemmas in life and how they handle it. 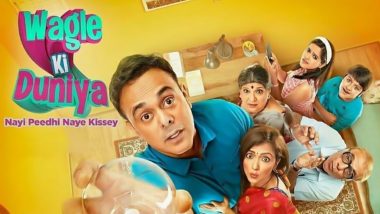 R K Laxman's original show Wagle Ki Duniya, a slice-of-life serial that was popular back in the '80s, finally has a new version of itself. The show that revolved around the story of the 'common man' was much loved by the audience back then and it looks like the same kind of response is pouring in for the new version as well. The critics have appreciated the storyline, the actors and the creators of the show for binging back the memories of the original Wagle Ki Duniya series. New 'Wagle Ki Duniya' a Nostalgic Trip Down Memory Lane: Usha Laxman.

Wagle Ki Duniya – Nayi Peedhi, Naye Kissey has become a topic of discussion and everyone is only talking about how good the new show looks already. Starring Aanjjan Srivastav, Bharti Achrekar, Sumeet Raghvan and Pariva Pranati, the show will revolve around how the new characters face a newer set of dilemmas in life and how they handle it. The show will also showcase the changes in the lives of the middle-class in the country.

The storyline sounds quite intriguing and before the makers air its first episode, here’s everything you need to know about Wagle Ki Duniya- Nayi Peedhi, Naye Kissey.

What Is the Show About?

The story of Wagle Ki Duniya – Nayi Peedhi, Naye Kissey will revolve around a simple, middle-class family man Rajesh Wagle. This character wishes for a better lifestyle for himself and his family but is very hesitant when it comes to taking risks. The character is sceptical about moving and evolving with the times. The show will talk about the strong value system of the middle-class and their daily life and issues. After Circus, Shah Rukh Khan's Doosra Keval Set To Return To Doordarshan: Here's All You Need To Know About The Show.

Cast Of The Show

Aanjjan Srivastav and Bharti Achrekar will reprise their roles of Srinivas and Radhika Wagle for the show. The new lead couple that we will get to see on the show is of Sumeet Raghvan and Pariva Pranati. Sumeet's character will be that of Srinivas' son who is married to Pranati'c character. The two will have kids and Chinmayee Salvi and Sheehan Kapahi will be taking up this role.

Usha Laxman, the daughter-in-law of R K Laxman, said that she started a number of initiatives to carry forward the legacy and one of the ideas was to bring back the popular show for a new generation. According to Usha Laxman, the new series is a tribute to the legend of RK Laxman. The series airs from Monday-Friday on Sony SAB at 9 PM and can be streamed on the Sony LIV app as well.

(The above story first appeared on LatestLY on Feb 23, 2021 09:06 PM IST. For more news and updates on politics, world, sports, entertainment and lifestyle, log on to our website latestly.com).