World Television Day 2021: Bhumika Chawla Opens Up On the Old Style of TV, Her Favourite Shows and Evolution of Small Screen!

Bhumika remembers watching Chitrahaar, Ramayan, Mahabharat and DD news with her father. "Sundays used to be movie time. There were also serials like Udaan and cartoons such as Spider-Man," she said about her childhood. 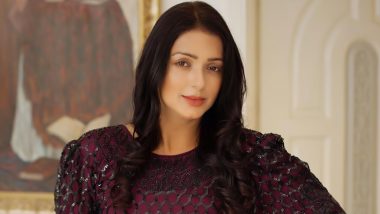 Every year, November 21 is observed as World Television Day that emphasises how TV plays a vital role in presenting different issues that affect people. It was initiated by the United Nations in December 1996. If we look back there are a lot of changes in terms of shows and techniques on television. Who can forget watching special serials like Mahabharat or children's favourite Jungle Book and its popular track Jungle Jungle Baat Chali Hai with lyrics by Gulzar?Bigg Boss 15: Bhumika Chawla Dismisses Rumours Of Being Approached For The Salman Khan Show; Says 'Won't Do It If Offered'.

With time now there are new shows for all age groups but one thing that has not changed is the craze for television though of course OTT has created a challenge for it. But of course still it caters to many around the world. On this day, we spoke to Seetimaarr actress Bhumika Chawla, who recalled the old style of television, her favourite shows and how the programmes have changed so far.

"With the television we see a lot, sometimes more than what's needed. I was very small when TV came. It was the one with the doors," she recalled Bhumika doesn't spend hours on consuming TV content, but Kaun Banega Crorepati hosted by Amitabh Bachchan is one show that she doesn't miss "I hardly watch TV now. If I do then it's KBC," said the Tere Naam actress. Idhe Maa Katha: Bhumika Chawla Opens Up About Her Role as a Biker on the Upcoming Film, Says ‘It Will Inspire Women’.

She remembers watching Chitrahaar, Ramayan, Mahabharat and DD news with her father. "Sundays used to be movie time. There were also serials like Udaan and cartoons such as Spider-Man," she said about her childhood.

She feels that with an overload and overdose of programmes and news, now it's not much fun. "It distracts families instead of binding them together. Also, news channels in India could be more subtle and real," she said.

(The above story first appeared on LatestLY on Nov 21, 2021 01:39 PM IST. For more news and updates on politics, world, sports, entertainment and lifestyle, log on to our website latestly.com).