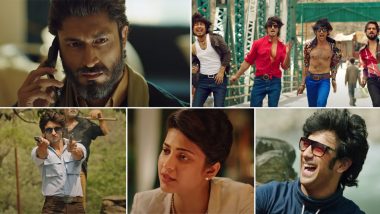 Among the many releases who are ditching theatrical premiere and opting for OTT is Tigmanshu Dhulia's next, Yaara. As the name suggests, the story revolves around a group of four friends who believe in living for each other. However, destiny has different plans in its store for them. Eventually they all part ways only to get back together. The film that stars Vidyut Jammwal, Shruti Haasan, Amit Sadh, Vijay Varma and Kenny Basumatar in the lead roles is a remake of a French movie, A Gang Story. Vidya Balan's Shakuntala Devi, Vidyut Jammwal's Yaara, Kunal Kemmu's Lootcase -Theatre Clash Shifts To OTT As Three Movies To Come Out On July 31.

Yaara's trailer was earlier unveiled in the day and the premise looks quite interesting. From being friends who had a penchant for committing crimes to being a part of the gang responsible for numerous armed robberies in their teens, Yaara follows the arc of their friendship that has stood the test of time. It is endearing and the lead actors look convincing. Being a Tigmanshu Dhulia directorial, we can assure you that the director will bring out the best in his actors and disappointment, at least when it comes to their performances won't be a matter of any concern. Yaara: Tigmanshu Dhulia Reveals His Upcoming ZEE5 Film Is a Homage to Honour the Friendship Between Four Friends.

The film will show the actors age from their childhood to the late 50s. While production value looks a bit compromised, we are willing to reserve our comments till we watch the movie. Shruti Haasan is also a part of the film's star cast and she plays Vidyut's romantic interest. Overall, Yaara trailer promises a thrilling ride ahead and here's hoping it doesn't disappoint.

(The above story first appeared on LatestLY on Jul 13, 2020 05:37 PM IST. For more news and updates on politics, world, sports, entertainment and lifestyle, log on to our website latestly.com).