As per the new schedule, while Anupamaa will air at 10 pm, Yeh Rishtey Hain Pyaar Ke Will begin airing at 9 pm. However, this will not impact the timing of Yeh Rishta Kya Kehlata Hai, which will continue to stay put at the 9:30 pm slot. 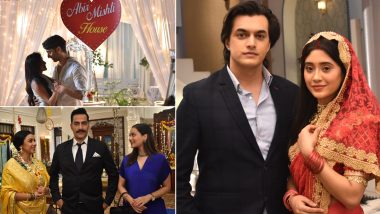 While a majority of television shows have begun shooting from June end and they will be telecasting fresh episodes from July 13, 2020. And so will Star Plus shows Yeh Rishta Kya Kehlata Hai, Yeh Rishtey Hain Pyaar Ke and Anupamaa. In fact, Anupamaa will be launching on July 13, as opposed to its original launch date of March 16. And along with the date change, the show has also interchanged timeslots with Yeh Rishtey Hain Pyaar Ke. The Shaheer Sheikh-Rhea Sharma show initially aired at 10 PM but will now see a timeslot change, thanks to Anupamaa. Rajan Shahi's Anupamaa Starring Rupali Ganguly and Sudhanshu Pandey To Begin Airing From July 13?.

The shows' audience will see a twist in the storylines of both Yeh Rishta... and Yeh Rishtey... While in the Mohsin Khan and Shivangi Joshi-starrer, they will now witness Naira's twin Tina make an entry into the show, the Shaheer Sheikh and Rhea Sharma starrer will see a murder mystery that surrounds lead Mishti.

Anupamaa, the new show on the block, features actress Rupali Ganguly playing the titular character. The show also features Sudhanshu Pandey as the husband and revolves around Anupamaa, a homemaker, who takes care of all the needs of her two kids and her husband, but is still the most neglected member of the family. Her daily struggles will make her relatable to every woman out there who puts her family's happiness before hers. Rupali, who has been a part of shows like Sanjivani, Sarabhai vs Sarabhai and Parvarrish - Kuchh Khattee Kuchh Meethi will mark her television comeback after 7 years.

(The above story first appeared on LatestLY on Jul 11, 2020 07:41 PM IST. For more news and updates on politics, world, sports, entertainment and lifestyle, log on to our website latestly.com).