The young lady strikes some really lovely poses to shine! 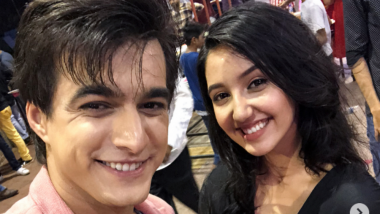 Believe it or not but her bio on wiki claims....hold your breath... that she is just 14! Yes, even we were shocked to find out that 'young' digit associated with her. But that doesn't stop Ashnoor Kaur from being her cool and a rather mature self. Ashnooor has worked in a range of TV series, but her portrayal of a young Naira in Yeh Rishta Kya Kehlata Hai won her fame and adulation.

The 14 year (we still refuse to believe the number though) Kaur started her career by playing the character of Prachi in Jhansi Ki Rani. She has also played Navika Vyas Bhatnagar in the television series Na Bole Tum Na Maine Kuch Kaha and Na Bole Tum Na Maine Kuch Kaha 2 to name a few. Kaur will be seen in Anurag Kashyap's Manmarziyaan starring Abhishek Bachchan and Sonam Kapoor.

We met Ashnoor at a party recently and we could not help but get a crazy picture shot with her! The young gal was absolutely spirited and all smiles. What's more? We even chose a perfect placard for her that of the diva..which in our frank opinion, she absolutely deserves. The young lady then struck some really lovely poses to shine!

Ashnoor also hummed the popular Badtameez number to define what partying is all about. We hope you liked the video! Do share your views on the same!

(The above story first appeared on LatestLY on Jun 06, 2018 09:55 PM IST. For more news and updates on politics, world, sports, entertainment and lifestyle, log on to our website latestly.com).