A Delhi court on Thursday granted bail to S. Bhaskararaman, chartered accountant of Congress leader Karti Chidambaram, who was arrested by the CBI on May 19 in the Chinese visa scam case. 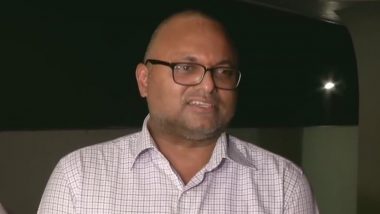 New Delhi, June 9: A Delhi court on Thursday granted bail to S. Bhaskararaman, chartered accountant of Congress leader Karti Chidambaram, who was arrested by the CBI on May 19 in the Chinese visa scam case.

A detailed order of the Special CBI judge of Rouse Avenue court will be made available later in the day. Chinese Visa Scam: CBI Is Playing Test Cricket With Me, Mocks Karti Chidambaram

The Chinese visa case is an alleged scam perpetrated in 2011 when P. Chidambaram, father of Sivaganga MP Karti Chidambaram was the Union Home Minister.

Last week, the court of special CBI judge M.K. Nagpal had denied the anticipatory bail applications moved by Karti and other accused persons in the case, including S. Bhaskar Raman, and Vikas Makharia, the associate vice-president of thermal power plant Talwandi Sabo Power.

Karti also knocked the doors of the high court following the dismissal of his anticipatory bail plea by the lower court and the verdict in the matter has been reserved.

In the last hearing in the trial court, senior advocate Kapil Sibal had argued that the alleged transaction was from 2011 and the ED registered the case after the lapse of a long time, pointing out that there was no investigation in all these years.

The counsel also argued that the value of the alleged transaction was Rs 50 lakh, which was less than Rs 1 crore, and in view of this fact he should be granted bail.

According to the FIR, the Mansa-based Talwandi Sabo Power Ltd took the help of a middleman and allegedly paid Rs 50 lakh to get visas issued for Chinese nationals to complete a project before the deadline.

"The payment of the said bribe was routed from the Mansa-based private company to a private person in Chennai and his close associate through a Mumbai-based company as payment of false invoice raised for consultancy and out of pocket expenses for Chinese visa related works," the FIR read.

(The above story first appeared on LatestLY on Jun 09, 2022 04:15 PM IST. For more news and updates on politics, world, sports, entertainment and lifestyle, log on to our website latestly.com).