Kolkata Police have arrested a man allegedly for running a fake vaccination in Kasba area in the southern fringes of the city based on a complaint by Trinamool Congress MP Mimi Chakraborty. 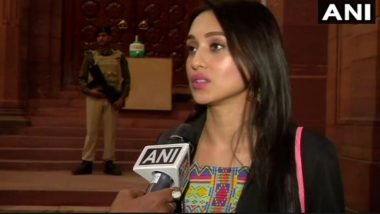 Kolkata, June 24: Kolkata Police have arrested a man allegedly for running a fake vaccination in Kasba area in the southern fringes of the city based on a complaint by Trinamool Congress MP Mimi Chakraborty.

The actor-turned-politician found the camp suspicious when she received no official confirmation after taking the vaccine from the camp on Wednesday evening and so lodged a complaint with the police. COVID-19 Vaccination Scam: Bengal TMC MP Mimi Chakraborty Duped in Fake Coronavirus Vaccination Racket, One Arrested

Police immediately arrested one Debanjan Dev in south Kolkata, who allegedly pretended to be an IAS officer and supervised thousands of vaccinations.

The fake vaccination camp is now turning into a bigger investigation amid questions about whether the jabs given to hundreds of people were genuine.

Chakraborty said that he was approached by the man requesting her to become the chief guest in the camp and she took the COVID-19 shot to encourage people to vaccinate themselves and help check the spread of the virus. Around 250 people were vaccinated at the camp.

"I took Covishield vaccine at the camp to motivate people for taking jabs. But I never received a confirmation message from CoWIN," she said.

She said she noticed that no Aadhaar card details were taken for people to register with CoWIN, so no one received any message after the shot.

The police are now investigating the shots given to people and whether they were vaccines past their expiry date. Kolkata Police and KMC who are jointly investigating the fake vaccine case have come to know that Dev had organised another camp in Amherst Street city college where 70 people, including the professors and their families were vaccinated.

Police have also come to know that this Kasba New Market camp was running for the last 12 days and more than 1,000 people were vaccinated.

A team of doctors and healthcare workers have reached Kasba New Market where the vaccination camp was organised and they will go to every family to see whether the vaccine had any side effects.

"The people told us they were given Covishield and Sputnik V but we cannot understand from where they got the vials. The KMC didn't make an allotment," a KMC official said.

"We have sent the vials for clinical tests and are waiting for the report. We are not sure what has been injected into the people. If we have not allotted any vial then from where did he get the vials. These are questions that need to be answered," the official added.

Interrogating Dev, police found out that he posed as Joint Commissioner of Kolkata Municipal Corporation and moved with an armed bodyguard.

"We have come to know that he had taken interviews of some people promising jobs in KMC. We are trying to find whether he was the only man in this racket or there are some people involved," a senior police officer of Kolkata Detective Department said.

(The above story first appeared on LatestLY on Jun 24, 2021 01:36 PM IST. For more news and updates on politics, world, sports, entertainment and lifestyle, log on to our website latestly.com).