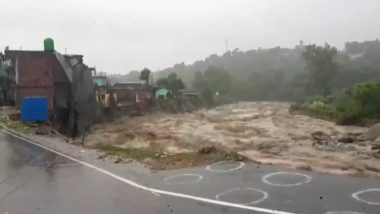 However, there was no loss to human life.  Flash Floods in Dharamshala: Heavy Rainfall Wreaks Havoc in Bhagsu Nag (Watch Videos)

Dharamsala, some 250 km from the state capital, recorded the precipitation of 119 mm, the highest ever in this monsoon.

Three houses and five shops located along a seasonal rivulet in the Gaggal area were damaged owing to gushing of water. The damage to the property was largely owing to encroachments on rivulets, officials told IANS.

India Meteorological Department (IMD) Director Manmohan Singh told IANS heavy to extremely heavy rainfall was recorded at many places in Kangra district. The rainfall was widespread in the state.

Palampur in Kangra district recorded 155 mm rain, the highest in the state, while it was 48 mm in Dalhousie, 10 mm in the state capital and 55 mm in picturesque tourist resort Manali.

The weather bureau has forecast heavy rain at isolated places in the state till Wednesday.

The southwest monsoon arrived in Himachal Pradesh on June 13, in its earliest onset in the past 21 years. Its normal arrival in the state is June 26. Since its arrival the hill state largely saw dominant rains.

(The above story first appeared on LatestLY on Jul 12, 2021 02:20 PM IST. For more news and updates on politics, world, sports, entertainment and lifestyle, log on to our website latestly.com).