Gurugram Rains: Flood Control Room to Be Set Up to Deal With Monsoon 2021

Ahead of the monsoon season, several steps are being taken by the district administration, Municipal Corporation of Gurugram (MCG) and the Gurugram Metropolitan Development Authority (GMDA) to deal with the discharge of rain water in the millennium city. 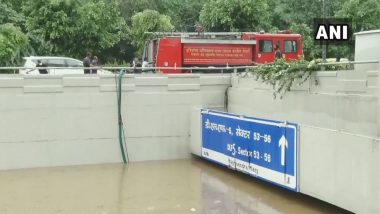 Gurugram, June 10:  Ahead of the monsoon season, several steps are being taken by the district administration, Municipal Corporation of Gurugram (MCG) and the Gurugram Metropolitan Development Authority (GMDA) to deal with the discharge of rain water in the millennium city.

GMDA officials said, in 2018-19 they had identified 79 places which faced waterlogging problems and after working on that it has been reduced to 35 now. Only 7 such places have been identified where the rain water discharge took more than two hours.  Gurugram Shocker: Man Arrested on Charge of Raping Daughter, Blackmailing Her of Sending Obscene Clips to Her In-Laws

The officials said they will install water pumps and deploy a dedicated team to discharge rain water at major points.

The agency officials informed that the drainage in Guragam flows towards the west from the east. There are three main drains, which emerge in Badshahpur Drain. These three drains go to Najafgarh.

The officials said ponds and check dams are being repaired in Aravali region. Also natural drains are being cleaned so that water of the Aravali area can be stopped from coming on to the city roads.

In addition, during the monsoon, GMDA, the civic body and traffic police teams are positioned with machinery at places such as Narasinhpur, Subhash Chowk, Sector-46, Golf Course Road, MG Road, Sector-4, Laxman- Vihar and Sector-9A Area, Near Basai Railway Flyover and few other places, the officials said.

MCG Commissioner Mukesh Kumar Ahuja told IANS, "To manage all the water, bottlenecks are being cleaned so that the city residents do no face any rain water problem in the monsoon. A number of MCG personnel along with other concerned departments will be deployed across the district during monsoon season."

(The above story first appeared on LatestLY on Jun 10, 2021 02:10 PM IST. For more news and updates on politics, world, sports, entertainment and lifestyle, log on to our website latestly.com).