India has started rebooting its connectivity vision as the COVID-19 pandemic restrictions on movement is easing in South Asian region. The new Jalpaiguri-Dhaka Mitali Express was flagged on June 1 -- its maiden commercial run by the Railway Ministers of India and Bangladesh. 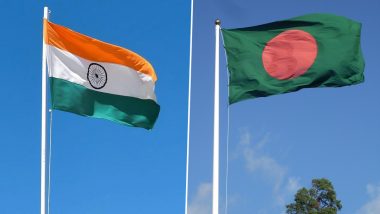 Dhaka, June 9:  India has started rebooting its connectivity vision as the COVID-19 pandemic restrictions on movement is easing in South Asian region. The new Jalpaiguri-Dhaka Mitali Express was flagged on June 1 -- its maiden commercial run by the Railway Ministers of India and Bangladesh.

The Mitali Express had been announced by Prime Minister Narendra Modi during his visit to Dhaka in March 2021, connecting North Bengal with Dhaka.  India-Bangladesh Mitali Express to Boost Trans-national Railway Connectivity

Khulna, the third largest city of Bangladesh is an industrial hub. The Barisal Express that used to run between Kolkata and Khulna till 1965 was re-christened as Bandhan Express and restarted in 2017 by governments of Prime Minister Narendra Modi and Sheikh Hasina.

Maitree Express had been launched in 2008 by the two countries with a capacity of 456 passengers -- the same as Bandhan Express.

India and Bangladesh have a shared border and long history of two way cultural and commercial exchanges.

The two countries revived their rail infrastructure and people-to-people exchanges by operating several border crossings for cross-border movements of goods and passengers, more vigorously after they reached a transit agreement in 2010.

India as the leader of the vision of connectivity among South Asian countries has taken up several projects along the borders of the neighbouring countries. It believes in "neighbourhood first" policy and the importance of connectivity for economic development and enhancing cultural and social ties through people-to-people contact.

It has connectivity and transport agreements with Nepal and Myanmar as well.

Notably, under its Look East Policy, India is also working on India-Myanmar-Thailand Trilateral Highway, a 1,408-km-long route to upgrade the connectivity so as to establish connectivity between South Asian and ASEAN countries, with a futuristic vision to link it with Laos, Cambodia and Vietnam as well.

Five railway border crossings between India and Bangladesh have been rebooted so far.

Ordinarily, cargo such as stone chips, ballasts, and rice has been carried to Bangladesh from India. CONCOR, a Public Sector Undertaking of India has also started moving containers with fast moving consumer goods (FMCS) for private clients.

The idea is to establish faster and cheaper rail freight links and reduce the dependence on sea route.

India strongly believes that the South Asian countries could benefit a lot by developing seamless road and rail connectivity. It has floated connectivity ideas from time to time and many of which have been agreed upon by the neighbouring countries for enhancing mutual benefits.

Currently, India and Bangladesh carry transit trade through three modes of transport; inland water, rail, and coastal shipping. Once finalised, the Bangladesh-Bhutan-Nepal-India (BBIN) Motor Vehicle Agreement, which has already been piloted, will add a fourth mode of transit.

The two countries are continuously working on improving transit facilities since 2010 when they agreed on a transit treaty. The two countries also signed a Protocol in 2015 under which, India could use four rivers through Bangladesh to link Kolkata and Murshidabad to Assam, Tripura and Meghalaya.

The two countries also signed the same year a treaty for use of Chittagong and Mongla Ports for which, they signed the Standard Operating Procedure (SOP) in 2018.

The SOP permitted goods reaching Chittagong and Mongla Sea Ports to be carried by road, rail and waterways to Agartala (Tripura) via Akhaura (BD); Dawki (Meghalaya) via Tamabil (BD); Sutarkandi (Assam) via Sheola (BD), and Srimantpur (Tripura) via Bibirbazar (BD).

The SOP also increased the amount of cargo that can be carried by allowing larger ships to ply the waterways.

The addition of these routes will allow greater transit between India and its North-Eastern States. At the same time, Nepal and Bhutan could also use the routes to access the Mongla Port of Bangladesh. It would be a win-win for all the stakeholders.

(The above story first appeared on LatestLY on Jun 09, 2022 11:11 PM IST. For more news and updates on politics, world, sports, entertainment and lifestyle, log on to our website latestly.com).