In light of the matter, medical officers have ordered an HIV test for all 5,000 inmates. 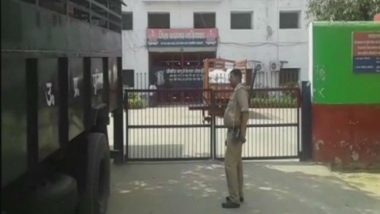 Ghaziabad, March 10: It has been a little over a month since UP Police arrested the quack doctor responsible for infecting more than 40 people of HIV virus by using infected syringe in the state's Unnao district, and now another horrid tale has appeared from the state's Dasna jail where up to 27 prisoners of Dasna Jail in Uttar Pradesh's Ghaziabad district have been found to be infected with HIV virus.

"All 27 of those prisoners get regular check-up and by the specialists, and free medicine. We also get other prisoners checked from time to time for symptoms of HIV," he said. But it is not clear as to what is the reason behind the 27 inmates testing positive for HIV virus. Also, it is alarming that last year 49 inmates tested were found to be HIV positive as claimed by the Ghaziabad Chief Medical Officer (CMO) N K Gupta. Questions are bound to be raised that if the numbers of inmates tested positive was so large last year, why was no preventive action taken against it. The jail authority has now decided to test all the 5000 inmates so as to ascertain if the infection is even more widespread.

If anything, this incident highlights the appalling and pathetic condition of healthcare in Indian jails. We keep hearing about incidents of abuse and assault form within the prison on inmates but this news is truly agonising because it underlines the fact that: Jails, which are supposed to be a place of contemplation and repentance for convicts is proving to be even more degrading and dangerous for the inmates. This is a disturbing trend to say the least and the reason for such a health fiasco needs to be addressed at the earliest. (With Agency Inputs)

(The above story first appeared on LatestLY on Mar 10, 2018 09:28 AM IST. For more news and updates on politics, world, sports, entertainment and lifestyle, log on to our website latestly.com).