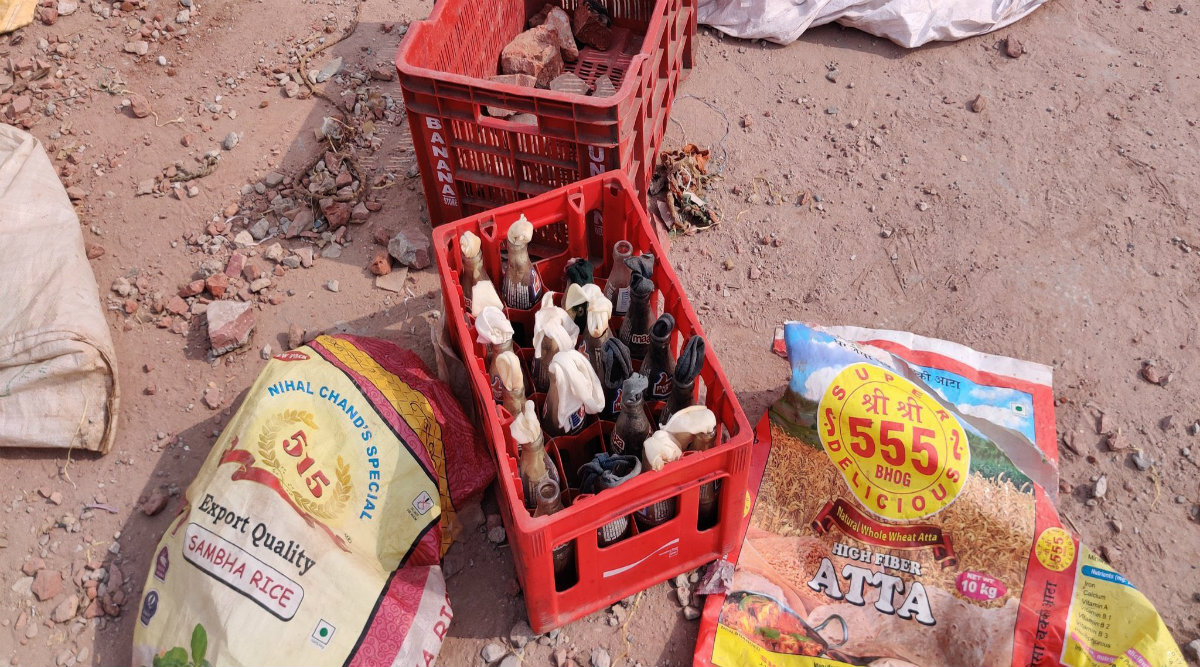 New Delhi, February 27: The house of Aam Aadmi Party (AAP) municipal councillor from Nehru Vihar, Tahir Hussain, in Chand Bagh still has a number of petrol bomb bottles, acid pouches, and stones scattered on the rooftop and inside.

Hussain's house has come under the scanner after a number of videos on social media showed over 100 to 150 people pelting stones, throwing petrol bombs and acid on Monday and Tuesday afternoon. Delhi Violence: Police Detains Man Who Opened Fire in North-East Delhi.

Even BJP leader Kapil Mishra, who was on the backfoot following criticism by the Delhi High Court for his alleged inflammatory videos, on Thursday hit back at AAP chief and Delhi Chief Minister Arvind Kejriwal.

"I am saying it openly. If Tahir Hussain's call detail records (CDR) during the days of the riots are probed, then both Sanjay Singh and Kejriwal's roles in the riots and Ankit Sharma's murder would be revealed," Mishra tweeted.

This comes in the aftermath of the recovery of Intelligence Bureau employee Ankit Sharma's body was recovered on Wednesday from the riot-hit areas. The family members of the IB staffer have reportedly accused Hussain of plotting Sharma's death. However, in a video shared by AAP national social head, Hussain claims that he was not present in his house for two days.

The scene outside Hussain's house bears a deserted look with bricks, metals, wooden sticks, furniture and refrigerators all burnt outside his house.

The area around the residence of Hussain bore the burnt of the stone pelting and petrol bombs as number of houses and shops were burnt during the violence on Monday and Sunday. On the second floor of the house, 10 to 15 pouches of acid were found along with same number of petrol bombs.

Even on the rooftop of the four-storey building a number of petrol bombs were found intact with a catapult that was used to throw the petrol bombs and stones on nearby houses.

After a number of videos showing people throwing stones and petrol bombs from his home, Hussain in a video statement claimed that he too was a victim of the violence that broke out in several parts of northeast Delhi.

Hussain's remarks came after fingers were pointed at him over the death of Sharma whose battered body was recovered on Wednesday from a nearby drain.

In the video, the AAP leader identifies himself and goes on to state, "I want to say that all the news being spread and shown about me is totally false. It is all dirty politics being played against me. Ever since Kapil Mishra made his provocative speech, the situation in Delhi has worsened. Stone-pelting is going on in several places and many other things that are being reported. All this happened here too, and we responded fast and called up the police. A huge crowd broke my office gate, climbed my terrace. I asked for help from the police and they reached a few hours later and then the situation was brought under control."

Riot-hit parts of northeast Delhi were slowly limping back to normalcy. The dead IB staffer's family has alleged Hussain's supporters brutally assaulted Sharma and killed him.

People in the neighbourhood have alleged that the AAP leader played an active role in the riots that engulfed the area since Sunday.

AAP leaders have been quick to defend Hussain over the allegations.

In the this week's deadliest violence in northeast Delhi, at least 34 people have lost their lives so far while over 200 others have been injured.

The clashes first broke out on Sunday between pro- and anti-CAA demonstrators.

In the three days of clashes, hundreds of vehicles, shops and homes were gutted. People have questioned the role of the Delhi Police over its inaction during the violence.