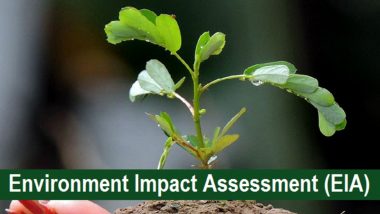 New Delhi, August 10: The Ministry of Environment, Forest and Climate Change released the draft notification of Environment Impact Assessment (EIA) 2020 in March seeking public opinions. On June 30, the Delhi High Court extended the time granted for public opinion on the contentious 2020 EIA draft until 11 August. As the deadline comes close, the 2020 EIA draft is widely debated. The ruling Bharatiya Janata Party (BJP) and the opposition Congress is sparing over the 2020 EIA draft. Rahul Gandhi Tweets 'EIA 2020 Draft Must be Withdrawn to Stop Loot of The Nation'.

In order to regulate activities that access, utilise, and affect (pollute) natural resources, India notified its first Environment Impact Assessment norms in 1994. Since then, all development projects are checked for their potential environmental impact and based on these assessments, they are granted or denied the EIA clearance. The 1994 EIA was replaced by the 2006 modified draft. Now, the Modi government has proposed the 2020 EIA draft to make the existing norms "more transparent and expedient". Draft EIA Notification Does Not Relax Process of Public Hearing: Javadekar to Ramesh.

One of the most contentious issues of the 2020 EIA draft is the exemption given to 40 different types of industries from the need for prior environmental clearance. It simply means no EIA clearance would be needed to carry out projects mentioned in the list of exempted. This includes projects labelled as "strategic" by the government. The draft also says that no information on "such projects shall be placed in the public domain".

Another issue is that the 2020 EIA draft allows projects operating in violation of the Environment (Protection) Act, 1986, can now apply for clearance. In case of violations, a violator will have to do remediation and resource augmentation corresponding to 1.5-2 times the "ecological damage assessed and economic benefit derived due to violation".

(The above story first appeared on LatestLY on Aug 10, 2020 01:21 PM IST. For more news and updates on politics, world, sports, entertainment and lifestyle, log on to our website latestly.com).