Neil Nitin Mukesh Birthday Special: Did You Know The Actor Played Younger Roles Of Govinda And Rishi Kapoor In Movies?

Neil Nitin Mukesh celebrates his birthday today and so, we thought of telling you something about him as a child actor. He played the younger versions of Govinda in Jaisi Karni Waisi Bharni and Rishi Kapoor in Yash Chopra's Vijay. The actor debuted with Johnny Gaddar. 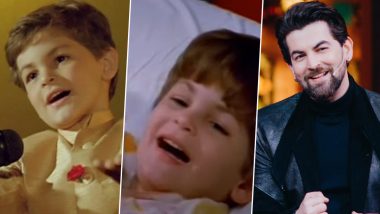 Neil Nitin Mukesh is one of those fortunate actors who have names of his father and grandfather added to his own. That can make any name extra special. So often when people make fun of his name, it does bother us. But the actor takes it in his own stride and never lets it affect the proud feeling his name gives him. The actor has proved his mettle since his first film Johnny Gaddar but many might not know that Neil began his acting journey as a kid. He played the younger roles of Govinda in Jaisi Karni Waisi Bharni and Rishi Kapoor in Vijay. 11 Years of New York: Neil Nitin Mukesh Reminisces His Movie With Irrfan Khan, Says ‘A Film I Will Always Be Very Proud Of’

People who have watched JKWB will remember a kid singing the title track on stage wearing a golden coloured achkan. Neil looks damn cute as the kid who is singing such an important song that's actually a life lesson. The movie was about how children ill-treat their elderly parents and how a grandson teaches his parents the error of their ways.

In Vijay, Neil played the younger version of Rishi Kapoor. The film was a multi-starrer with the likes of Anupam Kher, Hema Malini, Rajesh Khanna, Raj Babbar, Anil Kapoor being part of it. It is said that this was Yash Chopra's last action film. Check out little Neil here...

So if you have been impressed by Neil's acting talents, now you know where he got the gift of gab from. Working with such stalwarts of the industry at such a young age surely must have attracted him to the craft.

(The above story first appeared on LatestLY on Jan 15, 2021 08:20 AM IST. For more news and updates on politics, world, sports, entertainment and lifestyle, log on to our website latestly.com).