Sexist Indian Laws! From Marital Rape to Adultery, These 6 Laws Are A Threat to the Freedom of Women

From marital rape not being considered rape to homosexuality being regarded as against the natural order, the Indian Penal Code has a set of laws that are biased and sexist. 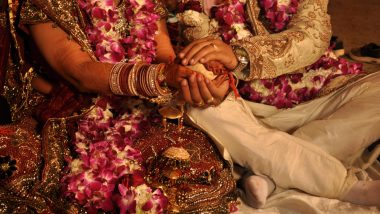 The laws of a country are meant to protect and safeguard the rights of a citizen and ensure equal justice to all of them. However, it is difficult to cater to a just society when the very core of it is patriarchal. The Indian Penal Code has a set of such laws that are blatantly favorable to one particular gender. Most of these laws prohibit freedom of women and restrict them to live a particular kind of life that is guided by the norms set by the patriarchal society. We list down six laws of India that are gender-biased and sexist:

According to the Prohibition of Child Marriage Act a girl in India can't marry before the age of 18, and a boy before 21. There is a considerable age gap of three years between the two genders' marriageable age which is implicit of the basic idea of a girl being a 'burden' and getting her married off as early as possible.

According to an exception in Section 375 of the Indian Penal Code, a man can have forceful sex with his wife, and it will not be considered rape. The Section 375 states 'Sexual intercourse by a man with his wife, the wife not being under fifteen years of age, is not rape.' This law highlights the underlined idea of 'ownership' of a woman that is crucial to our patriarchal setup. A man has absolute rights on his woman with or against her will.

The Section 377 of the Indian Penal Code criminalises the act of sexual intercourse that is against 'the order of nature', which indicates any sexual relationship apart from that between a man and woman is illegal. This law may not look sexist at face value. However, it is suggestive of the idea of masculinity and femininity defined and accepted only in a certain way in the Indian society.

The Goa Law on Polygamy

The Goa Law on Polygamy is a law specific to the state of Goa. It legally recognizes the second marriage of a 'Gentile Hindu' man of Goa, if his previous wife does not have any children before the age 25 or if she does not have a male child by 30. Though the use of this law is almost negligible in the current times, the existence of such a provision highlights the many privileges a man enjoys in the society while the roles and responsibilities of a woman remain restricted and defined by societal norms.

The Section 497 of the Indian Penal Code defines adultery. As per the law, only a man who has consensual sexual intercourse with the wife of another man without his consent can be punished for this offence. So, a woman cannot be charged with adultery. The law is both biased towards and unfair to women. It portrays them as an object in possession of the man as well as frees her from the law even if she is cheating on her husband.

As per the Hindu Minority and Guardianship Act, the father is legally considered to be the 'natural parent' of a child, below the age of five years. The act takes away from the mother the right on her children. The law applies to all Hindus, Sikhs, Buddhists and Jains in the country.

These are few laws that are favorable to a particular gender and cater to a particular set of ideologies of the society. Most of these are regressive and conservative. With such a set of laws, the broader struggle of establishing a society that is equal, fair and just to all is trying to build. Acts that legalise marital rape and section 277 are also a threat to the freedom of choice.

(The above story first appeared on LatestLY on May 22, 2018 03:42 PM IST. For more news and updates on politics, world, sports, entertainment and lifestyle, log on to our website latestly.com).