A woman in Ahmedabad died by suicide by jumping into the Sabarmati river in Ahmedabad on Thursday allegedly due to harassment by her husband and in-laws. Moments before taking the extreme step, the 23-year-old woman Ayesha Banu Makranu, recorded a video message. 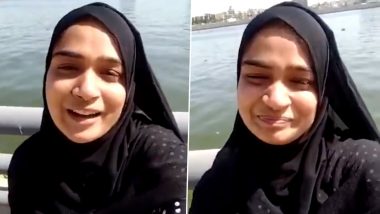 Ahmedabad, February 28: A woman in Ahmedabad died by suicide by jumping into the Sabarmati river in Ahmedabad on Thursday allegedly due to harassment by her husband and in-laws. Moments before taking the extreme step, the 23-year-old woman Ayesha Banu Makranu, recorded a video message. In the video message, Ayesha said that she had not taken the step out of any pressure and she was happy that she would meet Allah.

Police have lodged a case of abetment to suicide against her husband. The victim was a resident of Almina Park in Vatva of Ahmedabad and was employed with ICICI Bank. After recording the video, she sent it to her family and her husband. The woman had left her residence around 9 am for work on Thursday. According to a report published in The Indian Express, at around 4:30 pm, she called her father, Liyaqat Ali Makrani, and said that she was ending her life by jumping into the Sabarmati river. In the video message she could be heard saying that she wanted that Allah should not show her faces of humans again. Woman Ends Life After Recording Selfie Video.

This video by 23 years old Ayesha, shot minutes before she jumped into Sabarmati river, leaves one with moist eyes.

What a lovely soul. Left the world smiling even in pain & agony. Its not her story alone. This may be story of women & men around us who need a little love & care. pic.twitter.com/8J8NGYsOmS

Ayesha had married Rajasthan-based man Aarif Khan Gafurji in July 2018. She was living separately from her husband and was staying with her parents in Ahmedabad since March last year. Ayesha's body was recovered from the Riverfront west side. A case has been registered under IPC section 306 for abetment to suicide against the victim's husband at Sabarmati Riverfront West police station. TikTok Star Rafi Shaikh Dies by Suicide in Andhra Pradesh's Nellore; Investigation Launched.

Ayesha's father alleged that her in-laws harassed her for dowry. "On December 5, 2018, Aarif sent Ayesha back to my place after a fight. We then sat with the couple and came to a solution, and she was sent to Jalore. Then in July 2019, she was again sent back to my place by her husband. Then on January 26, 2020, Aarif took her back after taking Rs 2.5 lakh dowry from me," reported the media house quoting Makrani as saying. Notably, the victim's father had also filed a complaint against Ayesha's in-laws for domestic violence.

(The above story first appeared on LatestLY on Feb 28, 2021 11:04 PM IST. For more news and updates on politics, world, sports, entertainment and lifestyle, log on to our website latestly.com).