Twitter has marked a post by BJP IT Cell Head, Amit Malviya as 'manipulated media'. Malviya on November 28, tweeted a 'fact-check' post to counter a picture shared by Congress leader Rahul Gandhi wherein an elderly Sikh farmer was seen being hit by the police during the on-going farmers' protest in Delhi. 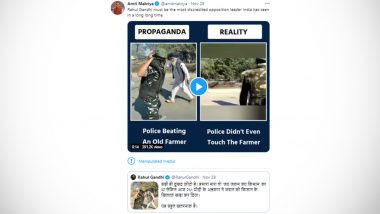 As a response to it,  Malviya posted a "propaganda vs reality" tweet with a video of the same image shared by Rahul Gandhi  and another image that showed he cop raising the baton but the farmer escaping the blow. He wrote, "Rahul Gandhi must be the most discredited opposition leader India has seen in a long long time." BJP Forged Alliance With AIMIM For West Bengal Assembly Elections 2021? Screenshot of Fake Tweet Goes Viral, Here's The Truth.

Rahul Gandhi must be the most discredited opposition leader India has seen in a long long time. https://t.co/9wQeNE5xAP pic.twitter.com/b4HjXTHPSx

Following this Alt News - a fact-checking website busted Malviya's manipulative  tweet, by sharing a longer video of the same incident, which showed policemen raining blows on protesters. Critics have accused  BJP IT cell head of cropping the video to mislead the citizens.

(The above story first appeared on LatestLY on Dec 02, 2020 06:21 PM IST. For more news and updates on politics, world, sports, entertainment and lifestyle, log on to our website latestly.com).