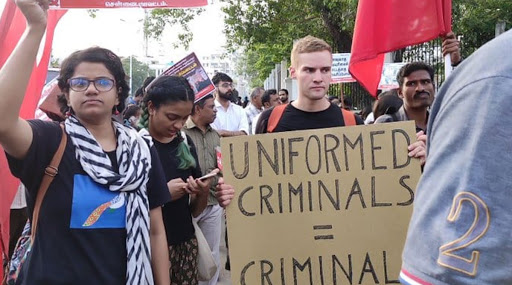 Lucknow, December 16: Twenty-one people have been arrested in connection with the students-police clash at the Aligarh Muslim University (AMU) during the protest against the amended citizenship law, police said on Monday.

"We have arrested 21 persons in the matter. Named FIR has been lodged against 56 persons and others unidentified. The process of hostel vacation is on and 25-30 per cent of them have been vacated, rest expected to be vacated by evening," SSP (Aligarh) Akash Kulhary told PTI over phone. Assam CM Sarbananda Sonowal Shown Black Flags by Anti-CAA Protesters (Watch Video).

Internet services in Aligarh, Saharanpur and Meerut stand suspended, a day after protests broke out in certain parts of the state, including at AMU, against the amended citizenship law, DGP O P Singh said.

Hundreds of AMU students had protested against the legislation and clashed with police at a campus gate on Sunday, following which the university adminstration announced closure of the institution till January 5. Officials said at least 60 students were injured in the clashes.

The clashes at AMU started after an agitation by Jamia Millia Islamia students in Delhi against the legislation turned violent and police used batons and tear gas to disperse them. The situation is normal in the campus, the SSP added.