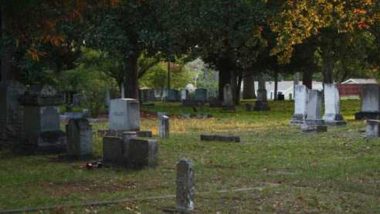 Ayodhya, June 26: In one of the best cases of love beyond the religion, Hindus in Faizabad city of Uttar Pradesh's Ayodhya have donated their lands for a qabristan (burial ground) as a part of an initiative by Bharatiya Janata Party (BJP) leader to foster love and harmony between the two communities. The land, adjacent to an existing graveyard, was a matter of argument between Hindus and Muslims in Belarikhan village as sometimes bodies were buried there. Hindu, Muslim Couples Undergo Kidney Swap Transplant in Punjab.

As now, the land has been gifted, it would be transferred to the Gosaiganj Qabristan Committee. "This land belonged to the members of the Hindu community, as per records, and it is adjacent to a qabristan. Sometimes they buried their dead in our land. Sometimes we reacted, but the practice continued," said Surya Kumar Jhinkan Maharaj, a spiritual who signed the land transfer deed along with eight others. Kidney Transplant Sends Out Message Of Unity in Mumbai, Hindu And Muslim Women Donate Organs to Each Other's Husbands.

Taking the initiative to bring harmony in the area, BJP Gosaiganj MLA Indra Pratap Tiwari convinced the landowners to give it to minority community for the graveyard. "To continue the tradition of Hindu-Muslim brotherhood in the area, this is a small gesture of peace from the side of Hindus. I hope, members of both communities will live here like brothers," Tiwari said.

(The above story first appeared on LatestLY on Jun 26, 2019 04:48 PM IST. For more news and updates on politics, world, sports, entertainment and lifestyle, log on to our website latestly.com).