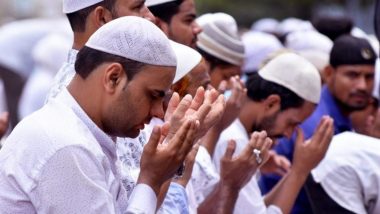 Bengaluru, July 26: Animal sacrifice during the upcoming Eid al-Adha or Bakrid has been prohibited at public places in the city, as well as other places identified by the civic body, an official said on Sunday.

"The general public is hereby notified that sacrifice of animals during Bakrid or any other religious occasion is prohibited on public roads and footpaths," said the official.

Other prohibited places include temples, mosques, any other religious place, and parks used for worship.

"Any person or organisation violating the above (prohibitions) are liable to be prosecuted under the Karnataka Municipal Corporation Act of 1976 for illegal sacrifice," said the official.

The official also suggested that a few more stringent laws will be applied to violators.

"Only authorised abattoirs are allowed to slaughter animals used for food," the official told IANS.

(The above story first appeared on LatestLY on Jul 26, 2020 01:27 PM IST. For more news and updates on politics, world, sports, entertainment and lifestyle, log on to our website latestly.com).