A 22-year-old woman died after she was gang-raped by two men in Balrampur, police said today. 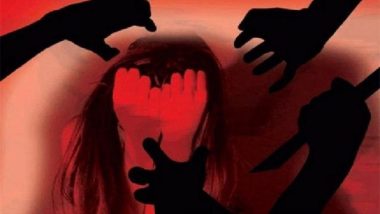 Balrampur, September 30: Amid ongoing outrage over the death of a 19-year-old girl who was gang-raped in Uttar Pradesh's Hathras district, another incident of sexual assault has been reported in the state. A 22-year-old woman died after she was gang-raped by two men in Balrampur, police said today. Two accused named by the victim's family have been arrested. Police dismissed reports that the woman's hand, legs and waist were broken. Hathras Gangrape: Girl Raped by 4 Men in UP Dies at Safdarjung Hospital in Delhi.

"A complaint has been recieved in Kaisri police station. In the complaint, family members of a 22-year-old girl said that she worked at a private firm. Yesterday, when she did not return home, her relatives started looking for her. Later, the girl came in an autorickshaw. A glucose drip was inserted in her hand. She was critical and rushed to a hospital. But she died," a senior officer said. The two accused were arrested and booked. Hathras Gangrape: Were You Sleeping For Two Weeks? Priyanka Gandhi Asks Uttar Pradesh CM Yogi Adityanath.

In a tweet, the Balrampur police rejected reports that the young woman's hand, legs and waist were broken. This has not been confirmed in the post mortem report, police said.

The gangrape in Balrampur comes as the country grieves the death of a 19-year-old girl who was allegedly gang-raped by four men in Hathras on September 14. She died at Delhi's Safdarjung hospital yesterday. Uttar Pradesh Chief Minister Yogi Adityanath has formed a Special Investigation Team (SIT) to probe the Hathras incident.

(The above story first appeared on LatestLY on Oct 01, 2020 12:01 AM IST. For more news and updates on politics, world, sports, entertainment and lifestyle, log on to our website latestly.com).