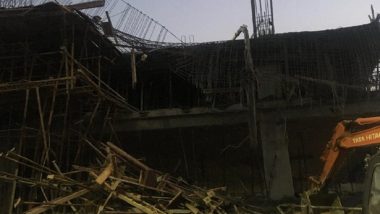 Bengaluru, April 5: In a tragic incident, two labourers died after an under construction building collapsed in Bengaluru’s Yeswanthpur area on Friday. The incident took place at around 5 am after the third floor of an under-construction multi-level car parking structure in APMC premise at RMC Yard near Yeshwantpur collapsed, reported International Business Times. At least eight people were also injured in the collapse. Building Collapse in Ulhasnagar, Thane: 3 Dead, 2 Critical After Building Collapses in Indira Gandhi Market.

The injured people were immediately shifted to nearby hospitals. The police rushed to the spot and started an investigation into the mishap. The police have also booked the builder for criminal negligence causing deaths and endangering lives of other labourers, reported Deccan Chronicle. A case was registered under the section 304-A of the Indian Penal Code (IPC). Rescue and Relief and rescue operations are underway.

Meanwhile, last month, around 16 people also lost their lives in the deadly building collapse at Dharwad in Karnataka. The investigation team, arrested the architect of the building Vivek Pawar from a lodge in Kolhapur. The owners of the collapsed building Ravi Basavaraj Sabarad, Basavaraj D Nigadi, Gangappa S Shintri and Mahabaleshwar Puradagudi also surrendered to the Dharwad Suburban Police. The five accused were booked under section 304, 337 and 338 of the IPC.

(The above story first appeared on LatestLY on Apr 05, 2019 10:41 AM IST. For more news and updates on politics, world, sports, entertainment and lifestyle, log on to our website latestly.com).