Sources on Wednesday confirmed to IANS that Madhuri Jain's contract was terminated as the probe has found misappropriation of funds during her time at the fintech platform. 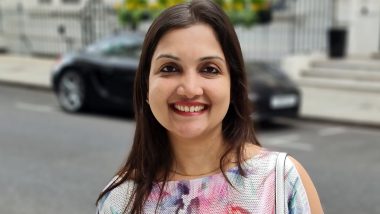 New Delhi, February 23: In a first big jolt to Ashneer Grover, BharatPe has terminated the services of his wife Madhuri Jain Grover, head of controls at the fintech platform, for alleged financial irregularities during her tenure. Sources on Wednesday confirmed to IANS that Madhuri Jain's contract was terminated as the probe has found misappropriation of funds during her time at the fintech platform.

"Madhuri Jain's contract has been terminated and the reasons for this are misappropriation of funds and authorisation of inflated bills during her tenure," said the source. BharatPe did not immediately respond to the development. Madhuri Jain was yet to respond to the development too. Alvarez and Marsal, a leading management consultant and risk advisory firm, is set to submit its report into financial irregularities at the firm during Grovers' time soon. Ashneer Grover Demands Rs 4,000 Crore From Investors If They Want Him to Quit BharatPe: Report.

Global audit firm PwC was also roped in auditing the functioning of the fintech platform during the Grovers' tenure. The newly-appointed BharatPe CEO Suhail Sameer recently wrote a letter to disgruntled employees, saying that there are some "serious allegations" based on internal complaints which are being reviewed and they must keep their faith in the Board. While many findings of governance review are "pretty standard", there are "a couple of more serious allegations", he wrote, saying the review is still "substantiating the allegations". BharatPe Co-founder and MD Ashneer Grover Goes on Long Leave After Viral Abuse Video.

Sameer said that whatever the Board decides, it will be in the best interest of employees, merchants and consumers. After BharatPe Co-founder and Managing Director Ashneer Grover, facing a controversy for allegedly using inappropriate language against Kotak Mahindra Bank's staff, took voluntary leave till March-end, his wife Madhuri Jain also went on leave in January.

(The above story first appeared on LatestLY on Feb 23, 2022 02:28 PM IST. For more news and updates on politics, world, sports, entertainment and lifestyle, log on to our website latestly.com).