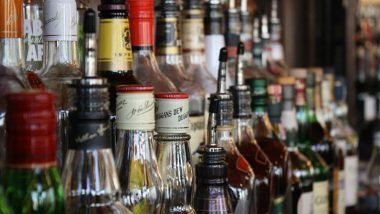 Patna, February 25: Four persons have died while two others have lost their eyesights after consuming suspected poisonous liquor in Bihar's Rohtas district in the last 10 days. One of the victims, however, claimed that he had consumed liquor in the neighbouring Varanasi which led to his loss of vision.

"I consumed liquor on February 15 in Varanasi and became ill four days later. Now I have lost my visibility," Surendra Pal said. Local villagers, however, said that Pal had consumed liquor in the village and he is changing his statement fearing the local police, as he doesn't want to face legal action. Bihar Hooch Tragedy: 2 Labourers Die After Consuming Country-Made Liquor in Gopalganj District.

Radhika Raman Dubey, an elderly villager of Kargahar, said: "Country-made liquor is available at every village in the jurisdiction of Kargahar police station, especially in its western parts. The police have no control over this. People openly prepare country-made liquor and sell it to the villagers. Dipak Singh and Satyadev Singh, both natives of adjoining Bahuara village, lost their lives after consuming liquor in the last two days."

"My brother Sudama Ram had consumed liquor six days ago. He died two days back after abdominal pain. We had taken him to the hospital, but the doctors couldn't save his life," said Jagdish Ram, Sudama Ram's brother.

When contacted, Sushant Kumar, the SHO of Karahgar police station, said: "We are recording the statements of the family members of the victims. All of them belong to different villages. The reason of deaths will be ascertained after the viscera reports come out."

(The above story first appeared on LatestLY on Feb 25, 2021 11:43 PM IST. For more news and updates on politics, world, sports, entertainment and lifestyle, log on to our website latestly.com).