A BMW car ran over a policeman in Delhi in the wee hours of Wednesday. 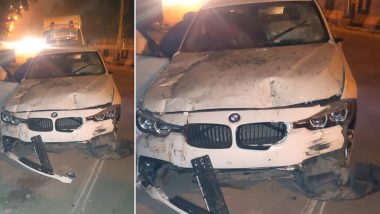 New Delhi, November 4: A BMW car ran over a policeman in Delhi in the wee hours of Wednesday. The BMW car later crashed after being chased by cops. The incident took place in Delhi's Sarita Vihar area. The driver fled from the scene after crashing the expensive car. A case has been registered. Alcohol was found inside the car. Ferrari Car Mows Down Pedestrian in Hyderabad's Madhapur, Driver Arrested.

According to news agency ANI, the driver crushed a policeman's led by running his BMW car over him. The unidentified driver was chased by other police personnel. He crashed the car and later escaped from the spot. A case under relevant sections of the Indian Penal Code and the Motor Vehicles Act has been registered. Brand New VW Polo Crashes Into Gate of Showroom After Driver Loses Control of The Car (Watch Accident Video).

Delhi: BMW car runs over policeman in Sarita Vihar crushing his leg & itself crashes after being chased by police. Alcohol was recovered from within the car at the incident spot.

A case has been registered under the IPC & the Motor Vehicles Act and a probe is on to nab accused. pic.twitter.com/o6yDRXwD2N

The accused driver was apparently drunk because police recovered liquor from within the BMW after the incident. A probe was underway to nab the accused. Further details were awaited.

(The above story first appeared on LatestLY on Nov 04, 2020 03:17 PM IST. For more news and updates on politics, world, sports, entertainment and lifestyle, log on to our website latestly.com).