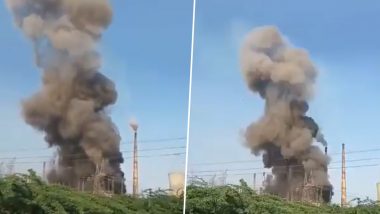 The injured workers have been shifted to a nearby hospital. A huge blanket of smoke engulfed the area after the explosion, creating panic among the residents. NLC India Limited’s rescue teams have reached the spot, and relief operations are underway. Vizag Gas Leak: Greater Visakhapatnam Municipal Corporation Issues List of Precautionary Measures for Safety of People.

7 injured in an explosion in NLC thermal plant pic.twitter.com/JM0KHYmvb8

According to a report published in The Times of India, thermal power station –II has seven units of 210 MW each. Currently, only three of them are under operation. The remaining four plants are closed due to annual maintenance.

(The above story first appeared on LatestLY on May 07, 2020 07:19 PM IST. For more news and updates on politics, world, sports, entertainment and lifestyle, log on to our website latestly.com).