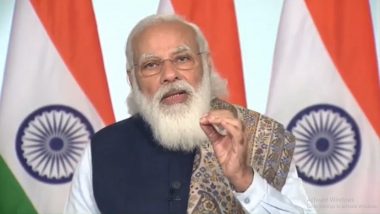 Speaking on the occasion, the Prime Minister said Vesak is a day to celebrate the life of Lord Buddha and to reflect on the noble ideals and sacrifices he made for the betterment of our planet. He added that he dedicated last year’s Vesak day programme to all the front-line workers leading humanity's fight against the COVID-19 pandemic.

A year later, COVID-19 pandemic has still not left us and several nations, including India, have experienced a second wave. He remarked that this once in a life-time pandemic has brought tragedy and suffering at the door-step of many and has impacted every nation. He said the economic impact left by the pandemic is huge and our planet will not be the same after COVID-19. He said there have been many note-worthy improvements as well over the last year, like having a better understanding of the pandemic, which strengthens  our strategy to fight it and having the vaccine, which is absolutely important to save lives and defeat the pandemic. He lauded the efforts of the scientists for developing the COVID-19 vaccines within a year and said this shows the power of human determination and tenacity. Buddha Purnima 2021 Wishes: President Ram Nath Kovind, Rahul Gandhi, S Jaishankar and Other Leaders Extend Greetings on Birth Anniversary of Lord Buddha.

The Prime Minister said that the four sights in the life of Lord Buddha ignited within him the desire to devote his life to removing human suffering. He said that in the last year, several individuals and organisations rose to the occasion and did everything possible to reduce human suffering. Generous contributions of equipment and materials were made by the Buddhist organisations and followers of Buddha Dharma from around the world. He remarked that these actions are in line with the teachings of Lord Buddha भवतु सब्ब मंगलम  (blessings, compassion and welfare of all).

The Prime Minister said that while fighting COVID-19, one must not lose sight of the other challenges faced by humanity like climate change, etc. He added that the reckless life-styles of the present generation are threatening the future generations and resolved to not let our planet remain wounded. He reminded the Lord Buddha’s emphasis on a way of life where respect for Mother Nature is paramount. He announced that India is among the few large economies to be on track to achieve their Paris targets. He said for India, sustainable living is not only about the right words but also about the right actions.

The Prime Minister remarked that the life of Gautama Buddha was about peace, harmony and co-existence. But today, there are still forces whose existence depends on spreading hate, terror and mindless violence. He said such forces do not believe in liberal democratic principles and thus gave a call for all those who believe in humanity to come together and defeat terror and radicalisation. He said Lord Buddh's teachings and the importance given to social justice can become a global unifying force.

The Prime Minister said Lord Buddha was the reservoir of brilliance for the entire universe. From him we all could draw light from time to time and take the path of compassion, universal responsibility and welfare. Quoting Mahatma Gandhi “Buddha taught us to defy appearances and trust in the final triumph of Truth and Love” the Prime Minister urged everyone to renew their commitment to the ideals of Lord Buddha.

The Prime Minister thanked the first responders, front-line health care workers, doctors, nurses and volunteers for selflessly risking their lives to serve others in need everyday. He expressed condolences to those who have suffered  and lost their near and dear ones.

(The above story first appeared on LatestLY on May 26, 2021 11:52 AM IST. For more news and updates on politics, world, sports, entertainment and lifestyle, log on to our website latestly.com).