The government hiked minimum selling price (MSP) for various kharif crops or the summer-sown season, ranging between 50% and 62%, following a decision taken by the cabinet on Wednesday. MSP is a floor price determined by the Center for crops aimed to avoid distress sale by signaling a minimum rate for private traders. 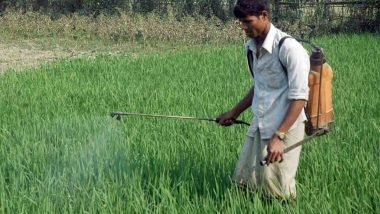 The government has increased the MSP of Kharif crops for marketing season 2021-22, to ensure remunerative prices to the growers for their produce. The highest absolute increase in MSP over the previous year has been recommended for sesamum (Rs. 452 per quintal) followed by tur and urad (Rs. 300 per quintal each). 7th Pay Commission Latest News Updates: Central Government Employees May Get Double Good News This Month, Details Here.

In case of groundnut and nigerseed, there has been an increase of Rs 275 per quintal and Rs 235 per quintal respectively in comparison to last year. The differential remuneration is aimed at encouraging crop diversification. Free Vaccination for 18-44 Age Groups To Be Provided by Central Government, Trial of 2 Vaccines for Children Underway; Key Takeaways From PM Narendra Modi’s Address to the Nation.

The increase in MSP for Kharif Crops for marketing season 2021-22 is in line with the Union Budget 2018-19 announcement of fixing the MSPs at a level of at least 1.5 times of the All-India weighted average Cost of Production (CoP), aiming at reasonably fair remuneration for the farmers. WhatsApp Message Claiming Govt Is Providing Phase 4 COVID-19 Relief Fund Is Fake! PIB Fact Check Reveals Truth Behind Viral Message.

Concerted efforts were made over the last few years to realign the MSPs in favour of oilseeds, pulses, and coarse cereals to encourage farmers to shift to the larger areas under these crops and adopt the best technologies and farm practices, to correct the demand-supply imbalance. The added focus on nutri-rich nutri-cereals is to incentivize its production in the areas where rice-wheat cannot be grown without long-term adverse implications for groundwater table.

With an aim to attain self-sufficiency in the production of pulses, a special Kharif strategy has been prepared for implementation in the ensuing Kharif 2021 season. A detailed plan for both area expansion and productivity enhancement for Tur, Moong, and Urad has been formulated. Under the strategy, all the available high-yielding varieties (HYVs) of seeds will be distributed free of cost to increase area through the intercropping and sole crop.

Similarly, for Oilseeds, the Government of India has approved an ambitious plan for the free distribution of high-yielding varieties of seeds to the farmers for the Kharif season 2021 in the form of mini-kits. The special Kharif program will bring an additional 6.37 lakh hectare area under oilseeds and is likely to produce 120.26 lakh quintals of oilseeds and edible oil amounting to 24.36 lakh quintals.

(The above story first appeared on LatestLY on Jun 09, 2021 04:37 PM IST. For more news and updates on politics, world, sports, entertainment and lifestyle, log on to our website latestly.com).