A chemical gas leakage was reported at LG Polymers industry in RR Venkatapuram village, Visakhapatnam on Thursday. Three people have died, including one child due to the gas leakage. 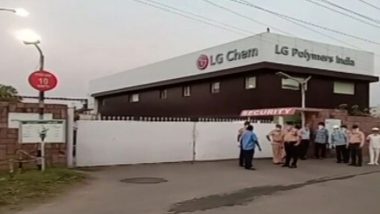 Andhra Pradesh, May 7: In a shocking incident, a chemical gas leakage was reported at LG Polymers industry in RR Venkatapuram village, Visakhapatnam on Thursday morning. Seven people have reportedly died, including one child due to the gas leakage. The evacuation process is still underway. According to an ANI update, people were rushed to the hospital after they complained of burning sensation in their eyes faced breathing difficulties.

According to the latest ANI update, the gas has been neutralised. NDRF team has reached the spot. The maximum impact was in about 1-1.5 km but the smell was in 2-2.5 km. More than 100 people have been shifted to hospital. In the wake of the situation, PM Modi has called for a meeting of the NDMA at 11 AM today.

CM Jagan Mohan Reddy will leave for Vizag and visit King George Hospital where the affected are being treated. The Chief Minister is closely monitoring the situation and has instructed the district machinery to take immediate steps and provide all help.

Police, fire tenders and ambulances reached the spot to attend to people in the villages. Local administration and personnel of the Indian Navy were pressed into action who evacuated five nearby villages. The hazardous gas leakage has left many ill in the area and it has created huge panic.  More details on this news will be updated. Uttar Pradesh: 7 Labourers Killed Due to Gas Leakage in Pipeline in Sitapur.

Three dead, Including One Child Due to Gas Leakage:

Earlier this year, a gas leakage was reported from a gas well in Andhra Pradesh's Uppudi village in Katrenikona Mandal. The gas leakage was first reported in a pipeline maintained by PFH Oil and Gas Private Limited. Villagers panicked soon after the news spread of the gas leakage.

(The above story first appeared on LatestLY on May 07, 2020 10:37 AM IST. For more news and updates on politics, world, sports, entertainment and lifestyle, log on to our website latestly.com).